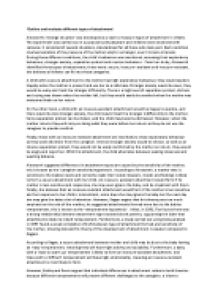 ﻿?Outline and evaluate different types of attachment? Ainsworths ?strange situation? was developed as a tool to measure types of attachment in infants. The experiment was carried out in a purpose build playroom and children were observed with cameras. It consisted of several situations, standardised for all those who took part. Each condition involved variation of the presence of the mother and/or a stranger, over 3 minute intervals. During these different conditions, the child?s behaviour was monitored, assessing their exploratory behaviour, stranger anxiety, separation protest and reunion behaviour. From her study, Ainsworth identified three types of attachment, these were: secure, insecure- avoidant and insecure-resistant, she believes all infants can fit into these categories. A child with a secure attachment to the mother has high exploratory behaviour; they would explore happily when the mother is present and use her as a safe base. Stranger anxiety would be seen, they would be wary and treat the stranger differently. ...read more.

Ainsworth suggested differences in attachment types are caused by the sensitivity of the mother, this is known as the ?caregiver sensitivity hypothesis?. According to Ainsworth, a mother who is sensitive to the babies needs and correctly reads their social releasers, moods and feelings is likely to form a secure attachment with her child. An insecure- avoidant attachment would form if he mother is less sensitive and responsive, she may even ignore the baby, and be impatient with them. Finally, she believes that an insecure-resistant attachment would form if the mother is less sensitive and her response to her child is inconsistent, some days she may ignore the baby but the next day she may give the baby a lot of attention. However, Kagan argues that this theory puts too much emphasis on the role of the mother; he suggested attachments formed were due to the babies temperament, this is known as the ?temperament hypothesis?. ...read more.

In addition, the method used in the ?strange situation? has been a useful tool, giving a great deal of information about a baby?s attachment in little time. It is also easy to replicate and has led to a rapid increase in the amount of research carried out, many finding similar results, suggesting the experiment is a reliable method to study attachment behaviours. However, the research lacks validity because of the unfamiliar surroundings, these may cause demand characteristics as the baby may be intimidated and act differently as a result. However, some say it may still be valid because children experience this on a regular basis when being left with a babysitter or at a nursery. Furthermore, there are ethical issues because the unfamiliar environment, separation from the mother and interaction with the stranger can cause mental distress for the baby. Finally, there is also the concern that not all babies can fit into the categories of attachment created, which is why a fourth one was added in 1986 called ?disorganised attachment? where babies behaviour was inconsistent. ...read more.

A thoughtful attempt at outlining and evaluating types of attachment with awareness of some of the limitations and benefits.