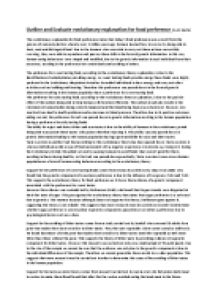 Transfer-Encoding: chunked ﻿Outline and Evaluate evolutionary explanation for food preference (8+16 marks) The evolutionary explanation for food preference states that today?s food preferences are a result from the process of natural selection whereby over 2 million years ago, humans learned how to survive by being able to hunt, cook and distinguish food. Due to the humans who were able to carry out these actions successfully surviving, they were able to reproduce and pass on these skills in the form of genetic information. In this way human eating behaviours were shaped and modified, due to the genetic information in each individual from their ancestors, resulting in the preference for certain foods and avoiding of others. The preference for sweet tasting food, according to the evolutionary theory explanation, is due to the identification of carbohydrates providing energy. As sweet tasting foods provide energy these foods were highly preferred in the Evolutionary Adaptation Period as it enabled individuals to have energy and carry out other activities such as building and hunting. ...read more.

Taste aversion is when an individual avoids a type of food associated with a negative experience or outcome e.g. being sick. During the Evolutionary Period, this aided survival by causing humans to avoid foods that weren?t good for them, resulting in them staying healthy. As this trait was passed down genetically, Taste Aversion is seen in our human population as a form of human eating behaviour according to the evolutionary theory. Support for the preference of sweet tasting foods comes from research carried out by Zhao et al (2008) who found that the genetic component of sweetness preference is due to the influence of two genes; TLR2 and TLR3. This supports the evolutionary theory for food preference as it shows that evidence of a genetic component associated with the preference for sweet tastes. However this evidence was contradicted by Stefansson (1960) who found that Copper Inunits were disgusted at their first taste of sugar. This goes against the evolutionary theory that states that sugar preference is a universal due to genetics. ...read more.

Therefore we cannot generalise these results to a wider population. This suggests that more research must be carried out in order to determine the cause of the avoiding of bitter tastes in the human population. Support for the taste aversion theory comes from research carried out by Garcia et al who fed poison lamb meat to wolves to make them ill and found that after this the wolves avoided eating the lamb meat in the future. Although this study provides evidence for taste aversion, this study was carried out in wolves and the theory is based on human behaviour therefore we cannot extrapolate these findings to human behaviour as we cannot assume the results of the wolves will be the same. This suggests that more research must be carried out in order to find evidence of taste aversion in human behaviour in order to fully support the theory of taste aversion. In conclusion, the evolutionary explanation can be labelled as reductionist as it doesn?t consider environmental factors affecting individual food preference as it believes that it food preference is only due to evolution. ...read more.