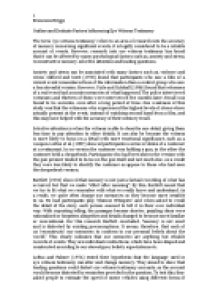 ﻿Francesca Briggs Outline and Evaluate Factors Influencing Eye Witness Testimony The term ?eye witness testimony? refers to an area of research into the accuracy of memory concerning significant events, it is legally considered to be a reliable account of events. However, research into eye witness testimony has found that it can be affected by many psychological factors such as, anxiety and stress, reconstructive memory, selective attention and leading questions. Anxiety and stress can be associated with many factors such as, violence and crime. Clifford and Scott (1978) found that participants who saw a film of a violent event remembered less of the information than a control group who saw a less stressful version. However, Yuile and Cutshall (1986) found that witnesses of a real event had accurate memories of what happened. The police interviewed witnesses and thirteen of them were interviewed five months later. ...read more.

Bartlett (1932) showed that memory is not just a factual recording of what has occurred, but that we make ?effort after meaning?. By this, Bartlett meant that we try to fit what we remember with what we really know and understand. As a result, we quite often change our memories so they become more sensible to us. He had participants play ?Chinese Whispers? and when asked to recall the detail of the story, each person seemed to tell it in their own individual way. With repeating telling, the passages became shorter, puzzling ideas were rationalised or forgotten altogether and details changed to become more familiar or conventional. For this research Bartlett concluded, ?memory is not exact and is distorted by existing preconceptions. It seems, therefore, that each of us ?reconstructs? our memories to conform to our personal beliefs about the world.? This clearly indicates that our memories are anything but reliable records of events. ...read more.

Participants who were asked the ?smashed? question thought the cars were going faster than those who were asked the ?hit? question. When people were asked a week after viewing the film whether they saw any broken glass at the scene (there was none), people in the smashed group were more likely to say yes. Therefore, a leading question that encouraged them to remember the vehicles going faster also encouraged them to remember that they saw non-existent broken glass. This suggests that memory is easily distorted by questioning technique and information acquired after the event can merge with original memory causing inaccurate memory. The addition of false details to a memory of an event is referred to as confabulation. This has important implications for the questions used in police interviews of eye witnesses. In conclusion, eye witness testimony can be influenced by a number of factors, including, anxiety and stress, selective attention, reconstructive memory and leading questions. They all have a large effect on eye witness testimony and affected the results in many different ways. ...read more.