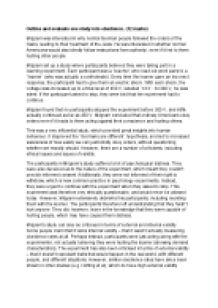 ﻿Outline and evaluate one study into obedience. (12 marks) Milgram was interested in why normal German people followed the orders of the Nazis, leading to their treatment of the Jews. He was interested in whether normal Americans would also blindly follow instructions from authority, even if it led to them hurting other people. Milgram set up a study where participants believed they were taking part in a learning experiment. Each participant was a `teacher` who read out word pairs to a `learner` (who was actually a confederate). ...read more.

Milgram concluded that ordinary Americans obey orders even if it leads to them acting against their conscience and hurting others. This was a very influential study, which provided great insights into human behaviour. It disproved the `Germans are different` hypothesis, and led to increased awareness of how easily we can just blindly obey orders, without questioning whether we morally should. However, there are a number of criticisms, including ethical issues and issues of validity. The participants in Milgram?s study suffered a lot of psychological distress. They were also deceived as to the nature of the experiment, which meant they couldn?t provide informed consent. ...read more.

They did, however, leave in the knowledge that they were capable of hurting people, which may have caused them distress. Milgram?s study can also be criticised in terms of external and internal validity. Some people claim that it lacks internal validity ? that it wasn?t actually measuring obedience rates at all. Perhaps instead, participants were just acting along with the experimenter, not actually believing they were hurting the learner (showing demand characteristics). The experiment has also been criticised in terms of external validity ? that it doesn?t represent traits that would happen in the real world, with different people, and different situations. However, similar obedience rates have since been shown in other studies (e.g. Hofling et al), which do have high external validity. ...read more.