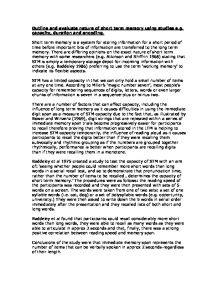 Outline and evaluate nature of short term memory using studies e.g. capacity, duration and encoding. Short term memory is a system for storing information for a short period of time before important bits of information are transferred to the long term memory. There are differing opinions on the exact nature of short term memory with some researchers (e.g. Atkinson and Shiffrin 1968) stating that STM is simply a temporary storage depot for incoming information with others (e.g. Baddeley 1986) preferring to use the term 'working memory' to indicate its flexible aspects. STM has a limited capacity in that we can only hold a small number of items at any one time. According to Miller's 'magic number seven', most people's capacity for remembering sequences of digits, letters, words or even larger chunks of information is seven in a sequence-plus or minus two. There are a number of factors that can affect capacity, including the influence of long term memory as it causes difficulties in using the immediate digit span as a measure of STM capacity due to the fact that, as illustrated by Bower and Winzenz (1969), digit strings that are repeated within a series of immediate memory span trials become progressively easier for participants ...read more.

longer words although Baddeley et al created another study to respond to this criticism which showed clearly the importance of pronunciation time over familiarity. Also, this was a laboratory experiment using lists of unconnected words which therefore did not reflect everyday use of STM but, positively, Miller did not account for the findings of studies which showed that immediate span depends on such things as the kinds of words used and the language in which they are spoken while this study can account for these findings. Another aspect of Short term memory is duration as the reason why things cannot be stored in the STM for a long period of time is because it has such a short duration. Rehearsal (i.e. repeating information in our minds) can increase the duration of STM as repeating is a method of repeatedly inserting the information into the STM, as can deliberate intention to recall where, as Sebrechts et al (1961) illustrated, information can vanish from the STM if there is not a conscious effort to retain it and another factor in duration of the STM is the amount of information to be retained as studies such as Murdock et al (1961) ...read more.

Procedures were as follows: participants were shown a random sequence of 6 consonants projected in rapid succession onto a screen. The strings of consonants were acoustically similar (e.g. P, C, V, T, B, D) or acoustically dissimilar (e.g. L, Z, F, X, H, W). The participants were then instructed to write down the letters in the same order as they appeared with the letters being presented too fast for participants to keep up-making them rely on memory. Conrad monitored the errors made by the participants. Findings of this study were that the majority of errors involved the substitution of a similar sounding letter with participants finding it more difficult to recall strings of letters acoustically similar in the context order than acoustically dissimilar letters, even though they were presented visually. Conclusions made from this study were that items are stored in STM in some form of acoustic code and even if consonants are presented visually, they are recorded in acoustic form in order to be stored in the STM, although other studies have shown that acoustic coding is not exclusively used in the STM with the Brandimonte et al 1992 study showing that when acoustic coding is prevented, visual coding may be substituted. ?? ?? ?? ?? ...read more.

The writer has shown a basic understanding of short term memory. However, there are different views on this subject and therefore the writer needs to make this clear throughout the essay. Miller's work differs from Baddeley et al, and the writer needs to make this clear. There is no mention of the different model Baddeley et al are using. The writer could also include some alternative to Conrad's conclusions.