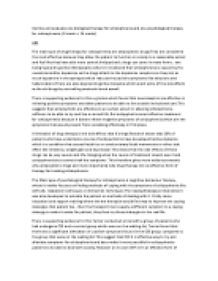 ﻿Outline and evaluate one biological therapy for schizophrenia and one psychological therapy for schizophrenia. (8 marks + 16 marks) A01 The main type of drug therapy for schizophrenia are antipsychotic drugs.They are considered the most effective because they allow the patient to function in society to a reasonable extent and feel like they have abit more control.Antipsychotic drugs can come in many forms , one being typical drugs like Chloropiazine where it is believed that schizophrenia is caused by the neurotransmitter dopamine so the drugs attach to the dopamine receptors so they isnt as much dopamine in the syynapse which reduces the positive symptoms like delusions and hallunications.There are also atypical drugs like clorapine which avoid some of the side effects as the old drugs by controlling serotonin levels aswell. ...read more.

like tiredness, weight gain and depression.This shows that the side effects of these drugs can be very severe and life changing when the course of treatment doesnt even treat schizophrenia but controls half the symptoms .This therefore gives more evidence towards why antipsychotic drugs and more importantly why drug therapy isnt an effective form of therapy for treating schizophrenia The Main type of pyschological therapy for schizophrenia is cognitive behaviour therapy, where it mainly focuses on finding methods of coping with the symptoms of schizophrenia like self-talk, relaxation techniques or distraction techniques.The Coping Statergy enchancement was also developed to educate the patient on methods of dealing with it .Firstly came education and rapport training where the the therapist would find way to improve the coping statergies that patient ...read more.

schizophrenia because it only helps to control symptoms instead of cure them which means it could be more effective alongside another form of treatment. A limitation of CBT is that it requires alot of effort on the side of the patient.So for example i the patient is difficult and doesnt turn up to some sessions or doesnt try with the techniques.If this happens then CBT is useless due to the fact that they have to apply and try all the techniques shown whereas in drug therapy it wouldn't be as much of a issue.So therefore the effectiveness of CBT is based on the patient which means that it isnt applicable to everyone who has schizophrenia due to the fact that they might not try as hard as others. ...read more.