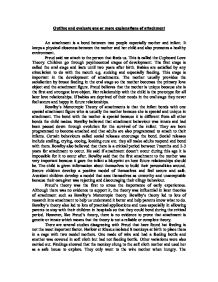 Outline and evaluate one or more explanations of attachment

Outline and evaluate one or more explanations of attachment An attachment is a bond between two people especially mother and infant. It keeps a physical closeness between the mother and her child and also promotes a healthy environment. Freud said we attach to the person that feeds us. This is called the Cupboard Love Theory. Children go through psychosexual stages of development. The first stage is called the oral stage and lasts until two years after birth. Babies are satisfied by any stimulation to do with the mouth e.g. sucking and especially feeding. This stage is important in the development of attachments. The mother usually provides the satisfaction by breast feeding in the oral stage so the mother becomes the primary love object and the attachment figure. Freud believes that the mother is unique because she is the first and strongest love object. Her relationship with the child is the prototype for all later love relationships. If babies are deprived of their needs in the oral stage they never feel secure and happy in future relationships. ...read more.

The child is given information about themselves to build their personalities around. Secure children develop a positive model of themselves and feel secure and safe. Avoidant children develop a model that sees themselves as unworthy and unacceptable because their caregiver was rejecting and discouraging their clingy behaviour. Freud's theory was the first to stress the importance of early experiences. Although there was no evidence to support it, the theory was influential in later theories of attachment such as Bowlby's Monotropic theory. Bowlby's theory led to lots of research into attachment to help us understand it better and help parents know what to do. Bowlby's theory also led to lots of practical applications and uses especially in allowing parents to stay with their children in hospitals so that they could bond during the critical period. However, like Freud's theory, there is no evidence to prove that attachment is genetic or innate which means that the theory is not a reliable or complete theory. ...read more.

Research has shown that infants make multiple attachments. Another criticism of Bowlby's theory is that he underestimated the role of fathers. He believed they were only there to give financial help to mothers so they could stay at home. This is a problem in modern day because mothers go to work and have their own income. Also, some children only have a father because women die in childbirth. Fathers are important to young boys because they have to identify with the same s*x parent. The idea of the critical period has been heavily criticised because this idea came from research with animals (ducks) this is a problem because anthropomorphism assumes that humans and animals have the same characteristics. Other evidence suggests that human infants can recover and make attachments after 3 years as long as they are given the correct loving environment. Overall, both theories believe that attachment is essential for survival and prototype fore future relationships. Also, the mother is the main care-giver because she is special and unique. Neither theories have sufficient evidence to support their claims or give a full explanation as to why we attach. ...read more.

A reasonable attempt to debate the contribution of two theories to our understanding of attachment. Consider rereading the essay and note where points are too vague or are undeveloped. 3*