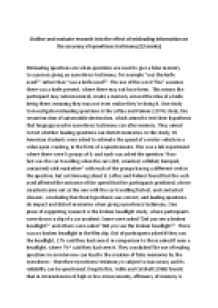 ﻿Outline and evaluate research into the effect of misleading information on the accuracy of eyewitness testimony (12 marks) Misleading questions are when questions are used to give a false memory to a person giving an eyewitness testimony, for example ?was the knife used?? rather than ?was a knife used??. The use of the word ?the? assumes there was a knife present, where there may not have been. This means the participant may subconsciously create a memory around the idea of a knife being there, meaning they may not even realize they?re doing it. One study to investigate misleading questions is the Loftus and Palmer (1974) study, the reconstruction of automobile destruction, which aimed to test their hypothesis that language used in eyewitness testimony can alter memory. They aimed to test whether leading questions can distort memories. ...read more.

Some were asked "Did you see a broken headlight?" and others were asked "Did you see the broken headlight?" There was no broken headlight in the film clip. Out of participants asked if they saw the headlight, 17% said they had seen it in comparison to those asked if seen a headlight, where 7%^ said they had seen it. They concluded The use of leading questions in an interview can lead to the creation of false memories by the eyewitness - therefore eyewitness testimony is subject to inaccuracy and its reliability can be questioned. Despite this, Yuille and Cutshall (1986) founds that in circumstances of high or low stress/anxiety, efficiency of memory is much worse. The optimum level is in the middle of the two, which is where the Loftus and Palmer study may have taken place. ...read more.

Loftus and Pickrell found that significantly more people from the group with the bugs bunny outline remembered seeing him in comparison to the group without the bugs bunny outline. This supports the idea that information we receive after creating a memory can alter that memory. One piece of refuting evidence is Loftus (1979). Loftus showed participants a set of slides that showed the theft of a large red purse from a handbag, they were then asked to read an account of the theft, the story gave the error that the purse had been brown, it was found that most participants except for 2, correctly remembered that the purse was red. This means, for information that is noticeable, the person who saw the event is more likely to keep their original memory intact. This shows that the original study may have lacked relevance & importance to the participants and this may have contributed to the differing findings. ...read more.