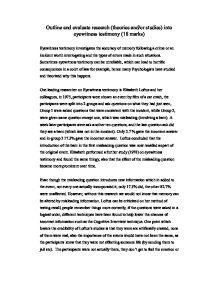 Outline and evaluate research (theories and/or studies) into eyewitness testimony

Outline and evaluate research (theories and/or studies) into eyewitness testimony (18 marks) Eyewitness testimony investigates the accuracy of memory following a crime or an incident worth interrogating and the types of errors made in such situations. Sometimes eyewitness testimony can be unreliable, which can lead to horrific consequences in a court of law for example, hence many Psychologists have studied and theorized why this happens. One leading researcher on Eyewitness testimony is Elizabeth Loftus and her colleagues, in 1975, participants were shown an event by film of a car crash, the participants were split into 2 groups and ask questions on what they had just seen, Group 1 were asked questions that were consistent with the incident, while Group 2, were given same question except one, which was misleading (involving a barn). ...read more.

One point which lowers the credibility of Loftus's studies is that they were are artificially created, none of them were real, also the importance of the events would have not been the same, as the participants knew that they were not effecting someone life (by sending them to jail etc). The participants were not actually there, they don't get to feel the emotion or the atmosphere were can effect recall. However the study is supported by another Loftus and Loftus (1980) found that recall was no more accurate when the participants were offered money, however some people are more or less motivated by money. Loftus also theorized that with the introduction of the misleading information the original information is deleted and replaced by the new false memory. ...read more.

When questioned again 15 months later, the memory recall was still superior. Hence Christian and Hubinette concluded that people remember events more accurately in real time and when they are actually involved. A criticism of this is that Christian and Hubinette should have subjected the same people to the tests similar to Loftus, so they could compare how well people would recall fake mock events to real life events. However I believe there study to be good as it shows that recalling a real life event is more accurate then a mock events, so eyewitness testimony can be reliable. In general Loftus's research is very useful, as it shows us eyewitness testimony can not be completely dependable, however in light of the her studies limitations and other studies results (Christian and Hubinette), Eyewitness testimonies are still a very good way of establishing events. ...read more.