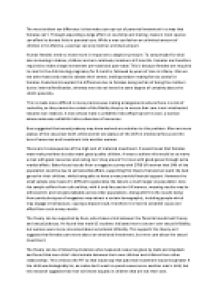 ﻿The most evident s*x difference is that males can opt out of parental investment in a way that females can?t. Through expending a large effort on courtship and mating, males in most species can afford to devote little in parental care. While a man can father an unlimited amount of children in his lifetime, a woman can only mother a limited amount. Human females need to invest more in response to adaptive pressure. To compensate for skull size increasing in babies, children are born relatively immature at 9 months. Females are therefore required to make a large investment pre-natal and post-natal. This is because females are required to care for the child during pregnancy for 9 months, followed by years of care in infancy. Men on the other hand only need to donate their s***n, making random mating far too costly for females. Evolutionists explain this difference due to females being certain of being the mothers due to internal fertilisation, whereas men do not have the same degree of certainty about the child?s paternity. ...read more.

Baker found results from a magazine survey with 2700 UK women that 14% of the population could be due to extramarital affairs, supporting this theory that women want the best genes for their children, whilst being able to have a man provide financial support. However the small sample size means it?s difficult to generalise the data to a much larger uk population. Also the sample suffers from cultural bias, with it only focused on UK women, meaning results may be ethnocentric and not generalisable across other populations. Along with this the results being from particular types of magazines may attract a certain demographic, including people which may engage in behaviours, causing a biased result, therefore it is hard to establish cause and effect from such survey results. The theory can be supported by Buss, who shows a link between the Parental investment theory and s****l jealousy. He found that male US students indicated more concern over s****l infidelity, but women were more concerned about emotional infidelity. ...read more.

Couples even adopt, putting equal amounts of energy in, despite there being no biological link, proving our ability to break away from our genetic programming. Dunbar criticises PIT as he suggests that males restrict their reproductive opportunities and invest more in individual offspring as this is more desirable due to the high costs of successful reproduction. This critics the theory as it shows that men have a choice and are not interested in unlimited offspring like the theory suggests. The parental investment theory also suffers from a gender bias, as it portrays men to be more susceptible to cheating and infidelity, but in truth this is not the case and there are cases of both genders behaving this way as a man cannot mate without a willing female either. Gross and Shine support the theory as they found with internal fertilisation, care is carried out by 86% of females while external fertilisation has 70% paternal care by males, supporting the idea that parental certainty plays a huge factor in the parental investment made by each gender. ...read more.