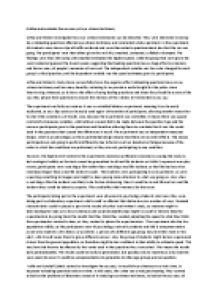 Outline and evaluate the accuracy of eyewitness testimony

﻿Outline and evaluate the accuracy of eye witness testimony Loftus and Palmer investigated how eye witness testimonies can be distorted. They were interested in seeing how misleading questions affected eyewitness testimony and conducted a lab experiment. In the experiment, 45 students were shown clips of traffic accidents and were then asked a question about how fast the car was going. The participants were then either given the verb hit, smashed, contacted, collided or bumped. The findings were that, the bump with smashed estimated the highest speed, while the group that were given the word contacted guessed the lowest speed, suggesting that leading questions have a huge effect on memory and the accuracy of people?s memories of an event. The independent variable was the verbs changed for each group?s critical question, and the dependant variable was the speed estimates given by participants. Loftus and Palmer?s study shows successfully shows the negative effect misleading questions have on eye witness testimony and has many benefits, including it can provide a useful insight for the police when interviewing witnesses, as it shows the effect of using leading questions and shoes they should be aware of the way they phrase their questions to ensure the memory of the witness isn't distorted in any way. The experiment was fairly accurate as it was a controlled labatory experiment, meaning it can be easily replicated, as any clips used can be easily used again with another of participants, allowing another researcher to check the consistency of results. ...read more.

The experiment also has low population validity, as the participants were 45 psychology university students and this is unrepresentative as not only students will witness car accidents. A person of a different age group may be either more or less alert, which could cause them to give a different answer. Also, the group of students might be less experienced drivers than the general population, so therefore might be less confident in their ability to estimate speed. This may have led them to be affected by the words used in the questions they were asked. This means the results lacks generalisiabilty. The results could be easily to generalized, but possibly only to students as only students were used; however it would be unrepresentative to generalize to other age groups and occupations. Yuille and Cutshall (1986) wanted to investigate the accuracy in recall of eyewitnesses to a real crime, in response to leading questions and over time. In this study, the crime was a real gun shooting. They wanted to look at the problems of laboratory research in studying eyewitness testimony, to look at the accuracy of eyewitness accounts and to compare eyewitness accounts taken straight after an incident with those taken four to five months after. Another aim was to see how eyewitness memory could be affected by leading questions. ...read more.

However, the study is said to lack generalisability as the case is unique and is a field study, assessing a small sample of real witnesses and it would be difficult to find one naturally occurring again. The results could?ve been because of a case of ?flashbulb memory?. This suggests that certain events are remembered in more detail and usually and because this was such a traumatic experience for some participants, this might be why they are able to remember what happened so clearly. This explains how those who were closer and more involved in the even remembered more details correctly and were found to be more reliable. However, there is little evidence for flashbulb memory?s as a distinct memory process and even though they might feel accurate, they are just as prone to forgetting & change as other memories. However, because the study was a field experiment, Yuille and Cutshall had weak control over extraneous variables, so more variables could've become confounding variables in the experiment, affecting the outcome. It would've been much harder to control confounding variables in the experiment, meaning the independant variable might not have even caused the changed in the dependant variable. For example, the age of the participants could?ve affected the experiment, because some older people who were taking part in the experiment might?ve not been that alert, affecting how much attention they paid to the incident and their memory and ability to recall what happened. ...read more.