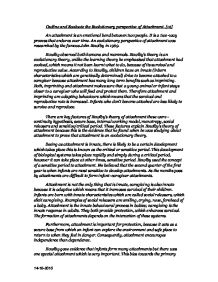 Outline and Evaluate the Evolutionary perspective on Attachment

Outline and Evaluate the Evolutionary perspective of Attachment. [12] An attachment is an emotional bond between two people. It is a two-way process that endures over time. An evolutionary perspective of attachment was researched by the famous John Bowlby in 1969. Bowlby observed both humans and mammals. Bowlby's theory is an evolutionary theory, unlike the learning theory he emphasised that attachment had evolved, which means it not been learnt what to do, because of its survival and reproductive value. According to Bowlby, children have an innate (inborn characteristics which are genetically determined) drive to become attached to a caregiver because attachment has many long term benefits such as imprinting. Both, imprinting and attachment makes sure that a young animal or infant stays closer to a caregiver who will feed and protect them. Therefore attachment and imprinting are adapting behaviours which means that the survival and reproductive rate is increased. Infants who don't become attached are less likely to survive and reproduce. There are key features of Bowlby's theory of attachment these were - continuity hypothesis, secure base, internal working model, monotropy, social releasers and sensitive/critical period. These features explain Bowlby's theory of attachment because this is the evidence that he found when he was studying about attachment to prove that attachment is an evolutionary theory. ...read more.

There are many studies which support Bowlby's perspective of evolutionary explanation of attachment, these are as follows - * Konrad Lorenz (1952) - attachment behaviour in animals - imprinting * Shaffer and Emerson (1964) - development of social attachment in infancy - Monotropy * Hazer and Shaver (1987) - love quiz - internal working model Firstly, Konrad Lorenz's study of attachment behaviour in animals; he divided the eggs by greylag geese into two groups. There was a difference in the way each group of eggs were hatched, one of the groups was hatched by their mother and the second group was hatched in an incubator. After they were hatched, the first group followed their mother, and the second group followed Lorenz. There was a pattern which emerged in the behaviour of the goslings; this was that the goslings were genetically programmed to exhibit certain behaviour with regard to any large organism that was there during the critical period of their life which is between 12-17 hours after hatching. This phenomenon is known as 'imprinting'. This study supports Bowlby's theory of attachment because Konrad Lorenz has the view that imprinting is innate because the goslings imprinted on the first moving object they saw. Bowlby believe that a similar adaptive process of forming attachments is likely to have evolved in humans as well as animals to enhance survival and increase the likelihood of reproduction. ...read more.

Anxious/insecure infants worried that partners didn't love them and showed obsessive and jealous behaviour. Avoidant/insecure types feared intimacy and believed that they did not need love to be happy. This supports Bowlby's theory as it shows that early attachments do act as a template for the future in this case in establishing adult relationships. This supports the internal working model because love experience and attitude towards love were related to attachment type. Nevertheless, we cannot say that infant attachment styles are identical to adult romantic-attachment styles; research has shown that early attachment styles can help predict patterns of behaviour in adulthood but they can be wrong. In conclusion, John Bowlby's theory of attachment is an evolutionary study which has had an enormous effect on many aspects of everyday life. To summarise Bowlby believed that attachments are innate and adaptive, meaning that they enhance the likelihood of survival and reproduction. Infants elicit behaviours and characteristics called social releasers which trigger biological care-giving reaction. The special relationship with a primary attachment figure, which Bowlby called monotropy, acts as a template of expectation for later relationships as a result of the internal working model. Attachment type in early childhood is said to be indicate behaviour patterns in later life. This is called the continuity hypothesis. Many studies have supported Bowlby's theory for example - Shaffer and Emerson and Konrad Lorenz. This means that ?? ?? ?? ?? 14-10-2010 ...read more.