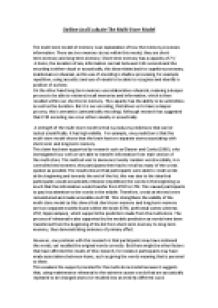 ﻿Outline And Evaluate The Multi-Store Model The multi-store model of memory is an explanation of how the memory processes information. There are two memory stores within this model; they are short-term memory and long-term memory. Short-term memory has a capacity of 7+/-2 items, the duration of any information can last between 0-96 seconds and the encoding is either visual or acoustically, this idea relates back to cognitive processes; maintenance rehearsal, as this use of encoding is shallow processing, for example repetition, using acoustics and use of visuals to be able to recognise and identify a position of a photo. On the other hand long-term memory uses elaborative rehearsal, meaning a deeper process to be able to retrieve/recall memories and information, which is then recalled within our short-term memory. The capacity has the ability to be unlimitless as well as the duration. ...read more.

the words in the beginning so much that the information would transfer from STM to LTM. This caused participants to pay less attention to the words in the middle. Therefore, words at the end were remembered and made accessible via STM. This strengthens the validity of the multi-store model as this shows that short-term memory and long-term memory are two separate models found within the brain (STM, prefrontal cortex whereas LTM, hippocampus), which supports the prediction made from the multi-store. The process of rehearsal is also supported by the models prediction as words have been transferred from the beginning of the list from short-term memory to long-term memory, thus demonstrating evidence of primary effect. However, one problem with this research is that participants may have misheard the words, yet recalled the original words correctly. ...read more.

we must be able to remember numbers, pictures and letters. This means that we can generalise the results from this experiment, thus it can be taken outside the research environment and applicable in everyday life. A weakness of this model is that there is research that contradicts its predictions in that long-term memory is not one single store but is made of several sub-stores; the sub-stores consist of, procedural, episodic and semantic. This therefore weakens the validity of the model because it does not account for these other sub-stores that hold different units, making the multi-store model too simplistic. This is shown by Spiers experiment, of studying patients with amnesia. Overall there are many positives and negatives towards the idea of the multi-store model, in my opinion; I feel that there is more positive feedback towards this model as it demonstrates studies toward capacity, duration and encoding. And that the model produces testable predictions, which is important for the scientific process, to enable theory testing and verification. ...read more.