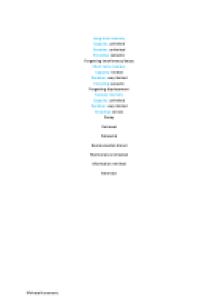 Outline and evaluate the multi-store model

﻿Long term memory Capacity: unlimited Duration: unlimited Encoding: semantic Forgetting interference/decay Short term memory Capacity: limited Duration: very limited Encoding: acoustic Forgetting displacement Sensory memory Capacity: unlimited Duration: very limited Encoding: senses Decay Retrieval Rehearsal Environmental stimuli Maintenance rehearsal Information retrieval Attention The multi-store model was suggested by Atkinson and Shiffrin (1968). They imagined memory as a flow chart. At each stage of the process, there are limitations in terms of Capacity, duration and encoding. Sensory memory: a set of limited capacity and holds information for a very brief period of time. Short-term memory: a temporary store where small amounts of information can be kept for brief periods. The information can be lost easily. Long-term memory: a permanent store where limitless amounts of information can be stored for a long time. Capacity: the amount of information that can be held in the memory at one time. Duration: the length of time that memories can be held Encoding: the way that the information is represented in the memory store e.g. ...read more.

Glanzer and Cunitz also conducted an experiment testing short-term memory. The participants were given a list of words presented one at a time group 1 were asked to recall words immediately after been presented but group 2 were given distracting tasks after the words and counted backwards in threes from 30 seconds they were then asked to recall words . Glanzer and Cunitz found that group 1 was remembered more than group 2. Baddeley carried out an experiment to test both short-term and long-term memory. He used 5 acoustically similar and 5 acoustically dissimilar words and 5 semantically similar and 5 semantically dissimilar words. He modified this to fit the long-term memory by changing 5 words into 10 words and prevented the participants from rehearsing by distracting them after each word. He found and concluded that acoustic similarity had no effect on recall but that words with similar meaning were poorly recalled. He concluded that long-term memory codes were mainly semantically. ...read more.

Clive Wearing: has a viral infection, can recognise his wife but has no recollection of her visit a few seconds after she?s gone, he can still play the piano. This also goes against the multi-store model because if he can enter his long-term memory to recognise his wife and play the piano. But cant remember things that happened seconds ago then his memory doesn?t work in a flow chart manner. The multi-store model in some cases works but others like Clive wearing and KF doesn?t apply. However the multi-store model has a lot of research to support it and build on and most researchers agree that short-term memory and long-term memory. On the other hand is far too simplified and these are artificial studies and not realistic. Not all events need rehearsal for example flashbulb memories go straight to long-term memory. In conclusion the multi-store model is supported by artificial, laboratory studies and might not reflect how memory works in everyday life. As well as this studies have been conducted that go completely against the studies previously conducted. Researchers have now looked to new models to explain memory processes more fully. Mirheta Huremovic ...read more.