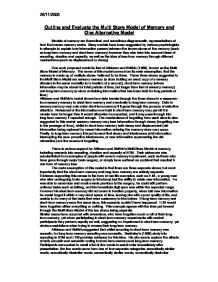 It was found that as the number of digits increased although the time taken to respond to the verbal reasoning questions increased the time delay was not significant (merely fractions of a second), and there was no increase in errors made in answering. From this it was concluded that each task used a separate substore of the short-term memory- verbal reasoning requiring the central executive, whilst digit span requiring the phonological loop. As Atkinson and Shiffrin's Multi Store Model represented the stores as simplistic unitary stores, these results would be impossible according to the model. This experiment contradicts their idea and suggests that it was too simplistic. Their model was also unable to explain exceptions found, such as that of autistic savants. The subjects challenge the theory that repetition and rehearsal must be used in order for information to pass from the short-term memory to the long-term memory; as they are able to recall precise figures without the need for rehearsal, and show no sign of decay over time, nor any sign of possible forgetting mechanisms. It's because Atkinson and Shiffrin's model is so solid that exceptions like this cannot be explained or accounted for. An alternative to the Multi Store Model was suggested by Craik and Lockhart (1972) in the Levels of Processing model. Their idea tackled the simplicity of Atkinson and Shiffrin's theory by emphasising the mental processes that occurred in the memory, and not fixating on such a rigid structure; like in the Multi Store Model which resulted in it being labelled as 'too linear'. Craik and Lockhart rejected the idea of separate stores of memory, instead suggesting that the stimulus inputs go through a variety of different processing operations, each processing operation coming from a spectrum organized by 'depth'. They proposed two terms to explain this; shallow processing, and deep processing. Shallow processing merely involved recognizing the shape or visual appearance of the stimulus; for example, the shape of the letters within a word. ...read more.

This should reduce the amount of interference that may occur, as suggested by Atkinson and Shiffrin as the mechanism for forgetting in long-term memory. This is called release from proactive interference- where by making new items distinctive from old items in the memory you decrease the chance of interference from existing memory strains. Each cue that is made will only match one item, so cannot be confused with other data that is similar and has already been stored. None of the models formulated by psychologists are entirely accurate, however they each have their strengths, and evidence from investigations that can support the theories behind them. Atkinson and Shiffrin's Multi Store Model of memory made the key assumptions that there were three stores of memory, but it also showed may faults. It was criticised of being too simple- claiming that the three stores were unitary when other research has shown proof of substores, and not demonstrating how information can be accessed from the long-term memory in order to encode information for the short-term memory; as the diagram of the model is said to be too linear and does not account for interaction between the memory stores. Craik and Lockhart's Levels of Processing model took a different view on the idea of memory, showing that there were not three memory stores, but rather that the retention of information merely differed by the depth it was processed at. However there was no independent definition of depth so it would be difficult to classify procedures using this model. It also agreed with the Multi Store Model of memory that acoustic encoding was "short-term" whilst semantic encoding was "long-term", this idea has been supported by many study's, including those of Conrad (1964) and Baddeley (1966). The validity of the ideas within Levels of Processing was improved when psychologists suggested that although the retention of information was not always dependent on the depth of processing, it did appear to be dependent on the effort of processing, as shown by Tyler et al (1979). ?? ?? ?? ?? 28/11/2008 ...read more.