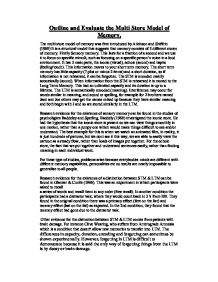 Outline and Evaluate the Multi Store Model of Memory. The multi store model of memory was first introduced by Atkinson and Shiffrin (1968) It is a structural model that suggests that memory consists of 3 different stores of memory. Firstly Sensory memory. This lasts for a fraction of a second and we use it to focus on specific stimuli, such as focusing on a specific person's voice in a loud environment. It has 3 main parts, the iconic (visual), echoic (sound) and haptic (feeling/touch). This information moves to your short term memory. The short term memory has little capacity (7 plus or minus 2 items) and a short duration, so if information is not rehearsed, it can be forgotten. The STM is encoded mainly acoustically (sound). When information from the STM is rehearsed it is moved to the Long Term Memory. This had an unlimited capacity and its duration is up to a lifetime. ...read more.

In another condition the participants had a distractor task, where they would count back in 3 's from 100. They found in the original condition there was a primacy effect (first on the list) and recency effect (last on the list) as expected. In the 2nd condition, they found that the recency effect had gone due to the distractor task. Other evidence for the distinction between STM & LTM comes from patients with brain damage. For instance Clive Wearing, who suffers from Anterograde Amnesia which is a condition that doesn't allow new memories to transfer into LTM. The differences in capacity, duration, encoding and forgetting can sometimes be shown experimentally. However, forgetting in LTM is difficult to demonstrate because it is said the only way of forgetting things from the LTM is by decay or brain damage. Research evidence for the capacity of STM comes from Jacobs (1887) ...read more.

The acoustically similar words were harder to recall because interference occurred. The same results happened when he did the experiment with semantically similar and dissimilar words. There are some problems with this evidence, the experiment used words, and due to everybody's minds and experiences being different, some words may have had an emotional effect on the participant and affected their results. The Multistore model was a very useful first attempt at defining memory. However, there are many problems with the model. First, the human mind could never be simplified into just 3 sections because it is far too complex. Some words may have an emotional effect on some people and some words are more difficult to remember than others, especially in foreign languages. Most of the studies were lab experiments, which lack ecological validity and mundane realism, meaning that these are not things people will do in their day to day lives, and participants may have got bored, so guessed or got better with practice, so the results from most of these experiments cannot be comparable to people in their day to day lives. ...read more.

Summary: Outline of the Multi Store Model describing its features, as well as details of some research that both supports and refutes the model. Some attempt to evaluate its contribution to understanding of how memory is stored and transferred to LTM. Improvement of this essay can be gained by planning and structuring the argument, starting with an introduction, then introducing the outline of the model, evidence for and against the model by considering relevant research, and finishing with a conclusion on its contribution to the area. One or two typos - otherwise sound on grammar and style.