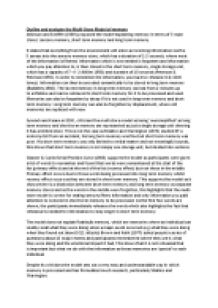 Outline and evaluate the Multi-Store Model

﻿Outline and evaluate the Multi-Store Model of memory Atkinson and Schiffer (1969) proposed the model explaining memory in terms of 3 main stores: sensory memory, short term memory and long term memory. It states that everything from the environment will enter as incoming information via the 5 senses into the sensory memory store, which has a duration of 1-2 seconds, where most of the information is filtered. Information which is not needed is forgotten and information which you pay attention to, is then stored in the short term memory, single storage unit, which has a capacity of 7 +/- 2 (Miller 1956) and duration of 18 seconds (Peterson & Peterson 1959). In order to remember the information, you have to rehearse it (1-1000 times). ...read more.

As the first few words are shown, the participants immediately rehearse the words which also highlights the fact that rehearsal is needed for information to stay longer in short term memory. The model does not explain flashbulb memory, which are memories where an individual can vividly recall what they were doing when a major event occurred (e.g what they were doing when they found out about 9/11 attacks) Brown and Kulik (1977) asked people a series of questions about 10 major events and participants remembered where they were, what they were doing and the emotional impact it had, This shows that it is not rehearsal that is important but what we do with the information as these memories are ?special? to each individual. Despite its criticisms the model sets out a very easy and understandable way in which memory is processed and has formulated much research, particularly Shallice and Warrington. ...read more.