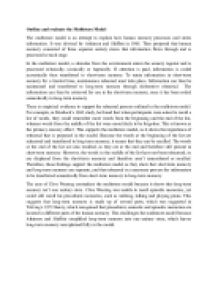 Outline and evaluate the Multistore Model of Memory.

ï»¿Outline and evaluate the Multistore Model The multistore model is an attempt to explain how human memory processes and stores information. It was devised by Atkinson and Shiffrin in 1968. They proposed that human memory consisted of three separate unitary stores that information flows through and is processed at each stage. In the multistore model, a stimulus from the environment enters the sensory register and is processed echoically, iconically or haptically. If attention is paid, information is coded acoustically then transferred to short-term memory. ...read more.

For example, in Murdochâ€™s 1962 study, he found that when participants were asked to recall a list of words, they could remember more words from the beginning and the end of the list, whereas words from the middle of the list were more likely to be forgotten. This is known as the primacy-recency effect. This supports the multistore model, as it shows the importance of rehearsal that is proposed in the model. Because the words at the beginning of the list are rehearsed and transferred to long-term memory, it means that they can be recalled. ...read more.

The case of Clive Wearing contradicts the multistore model because it shows that long-term memory isnâ€™t one unitary store. Clive Wearing was unable to recall episodic memories, yet could still recall his procedural memories, such as walking, talking and playing piano. This suggests that long-term memory is made up of several parts, which was suggested in Tulvingâ€™s 1972 theory, which recognised that procedural, semantic and episodic memories are located in different parts of the human memory. This challenges the multistore model because Atkinson and Shiffrin simplified long-term memory into one unitary store, which leaves long-term memory unexplained fully in the model. ...read more.