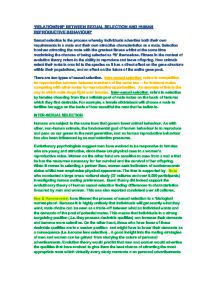 'RELATIONSHIP BETWEEN s****l SELECTION AND HUMAN REPRODUCTIVE BEHAVIOUR' s****l selection is the process whereby individuals advertise both their own requirements in a mate and their own attractive characteristics as a mate. Selection involves attracting the mate with the greatest fitness whilst at the same time maximising the chances of being selected as 'fit' themselves. Fitness in the context of evolution theory refers to the ability to reproduce and leave offspring. How animals select their mate is crucial to the species as it has a direct effect on the gene structure within their populations, and an effect on the future of the entire gene pool. There are two types of s****l selection. Intra-s****l selection refers to competition for reproductive success between members of the same s*x - for instance males competing with other males for reproductive opportunities. An example of this is the way in which male stags fight over females. Inter-s****l selection refers to selection by females choosing from the available pool of male mates on the basis of features which they find desirable. For example, a female stickleback will choose a male to fertilise her eggs on the basis of how beautiful the nest that he builds is. ...read more.

Both types on men were relatively uninterested in the financial status of potential partners. INTRA-s****l SELECTION One consequence of males competing with each other for access to mates is s****l dimorphism. This refers to the observations that, in many animal species were there is intrasexual competition; the male looks different from the female. Human males for example are on average 12/15% larger than human female. The great apes show greater s****l dimorphism with the males being up to 50% bigger than females. s****l selection accounts for a great deal of dimorphism, most frequently seen as secondary s****l characteristics. In animals they take many forms, such as the long tail feathers of the peacock or the manes of lions. Examples in females include the reddening of female rhesus monkey hindquarters and smooth pectoral fins in carp. In human males it includes size (.e.g. height and physique) , facial hair and deepening voice; while in women it includes enlargement of b*****s and changes in body fat distribution (.i.e. widening hips) and smooth hairless skin. Secondary s****l characteristics are honest indicators of male reproductive fitness, as they are not expressed to the same degree in unfit males. Unfit males don't seem to be able to tolerate the physical investment that the developments of secondary s****l characteristics require. ...read more.

Many of these studies carried out in this area have significant ethical implications. For example, Clarke and Hatfield's study on university campuses involved deception and a lack of informed consent. The studies carried out by Buss and Schmitt and Schutzwohl into s****l jealousy involved some degree of stress and emotional distress by their very nature, even though participants consented to take part. There are also issues of demand characteristics. In Buss and Schmitt's study, it's likely that participants were influenced to produce social desirable answers, and it may be easier or more socially acceptable for men to report s****l dreams and fantasies then women. Evolutionary theory sees these preferences and behaviours as originating through the processes of s****l selection. s****l selection operates on similar principles to Darwin's natural selection. Darin was initially puzzled by bodily features such as the male peacocks spectacular tail, which appeared to offer no survival value and indeed made the peacock much more vulnerable to predictors as it hampered the bird's ability to fly. However, the peacock's long and glorious tail was found to be valued by peahens that actively preferred mates with beautiful tails. In order to explain this, Darwin proposed the concept of s****l selection, suggesting that some bodily features and behaviours exist because they are valued by the other s*x and are deemed attractive, this leading to increased opportunities for mating. ...read more.