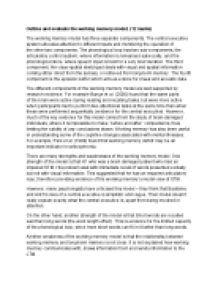 ﻿Outline and evaluate the working memory model. (12 marks) The working memory model has three separate components. The central executive system allocates attention to different inputs and monitoring the operation of the other two components. The phonological loop has two sub-components, the articulatory control system, where information is rehearsed subvocally, and the phonological store, where speech input is held for a very brief duration. The third component, the visuo-spatial sketchpad deals with visual and spatial information coming either direct from the senses, or retrieved from long-term memory. ...read more.

However, much of the key evidence for this model comes from the study of brain-damaged individuals, where it is impossible to make `before and after` comparisons, thus limiting the validity of any conclusions drawn. Working memory has also been useful in understanding some of the cognitive changes associated with mental illnesses. For example, Park et al. (1999) found that working memory deficit may be an important indicator in schizophrenia. There are many strengths and weaknesses of the working memory model. One strength of the model is that KF who was a brain damaged patient who had an impaired STM. ...read more.

Their model doesn?t really explain exactly what the central executive is, apart from being involved in attention. On the other hand, another strength of the model is that Short words are recalled well than long words (the word length effect). This is evidence for the limited capacity of the phonological loop, since more short words can fit in it better than long words. Another weakness of the working memory model is that the relationship between working memory and long-term memory is not clear. It is not explained how working memory communicates with, draws information from and sends information to the LTM. ...read more.