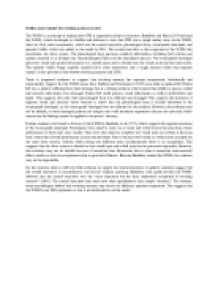 Ã¯Â»Â¿Outline and evaluate the working memory model The WMM is an attempt to explain how STM is organized and how it functions. Baddeley and Hitch (1974) devised the WMM, which developed on Shiffrin and Atkinsonâ€™s view that STM was a single unitary store. In the WMM, there are four main components, which are the central executive, phonological loop, visuospatial sketchpad, and episodic buffer, which was added to the model in 2001. The central executive is the component of the WMM that coordinates the slave system. The phonological loop processes auditory information, including both written and spoken material. It is divided into the phonological store and the articulatory process. ...read more.

Patient KF could process visual information as well as recall letters and digits. This suggests that only their phonological loop was affected and damaged. This supports the existence of separate visual and acoustic stores because it shows that the phonological loop is located elsewhere to the visuospatial sketchpad, as the visuospatial sketchpad was not affected by the accident. However, this evidence may not be reliable, as brain damaged patients are unique cases with traumatic experiences that are not universal, which means that the findings cannot be applied to everyoneâ€™s memory. Further evidence was found in favour of the WMM by Baddeley et al (1975), which supports the separate existence of the visuospatial sketchpad. ...read more.

However, this evidence may not be reliable because of researcher bias. Researcher bias is when a researcher unconsciously affects results or data in an experiment due to personal influence. Because Baddeley created the WMM, his evidence may not be dependable. On the contrary, there is still very little evidence to support the central executive. Cognitive scientists suggest that the central executive is unsatisfactory and doesnâ€™t explain anything. Baddeley, who partly devised the WMM, believed that the central executive was the â€œmost important but the least understood component of working memoryâ€ (2003). The central executive may need more clear specifications than simply â€œattentionâ€. For instance, some psychologists believe that working memory may consist of different, separate components. This suggests that the WMM is not fully explained, as this is not elaborated on in the model. ...read more.