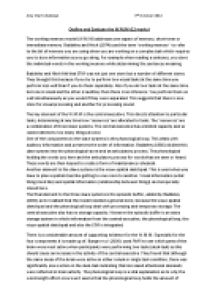 ﻿Amy Van Schalkwyk 3rd October 2012 Outline and Evaluate the W.M.M (12 marks) The working memory model (W.M.M) addresses one aspect of memory, short-term or immediate memory. Baddeley and Hitch (1974)used the term ?working memory? to refer to the bit of memory you are using when you are working on a complex task which requires you to store information as you go along. For example when reading a sentence, you store the individual words in the working memory while determining the sentences meaning. Baddeley and Hitch felt that STM was not just one store but a number of different stores. They thought this because if you try to perform two visual tasks at the same time you perform less well than if you do them separately. Also if you do two tasks at the same time but one is visual and the other is auditory then there is no inference. You perform them as well simultaneously as you would if they were separated. This suggests that there is one store for visual processing and another for processing sound. The key element of the W.M.M is the central executive. ...read more.

The phonological loop is a vital explanation as to why the word-length effect occurs as it seems that the phonological loop holds the amount of information that you can say in 2 seconds. This makes it harder to remember a list of long words compared to shorter words. Longer words cannot be rehearsed on the phonological loop because they don?t fit. However if a person is given an articulatory suppression task, this ties up the articulatory process and means you can?t rehearse the shorter words more quickly than the longer ones, so the word length effect disappears. This is evidence for the articulatory process. Baddeley et at. (1975b) demonstrated the existence of the visuo-spatial sketchpad. Participants were given a visual tracking task. At the same time they were given another task in which they had to describe the angles on the letter F (task 1) or they had to perform a verbal task (task 2). Task 1 proved more difficult to perform than task 2 presumably because the second task involved two different components. This is evidence to support the evidence related to the effects of doing two tasks using the same or different components. ...read more.

Therefore we can see that central executive is unsatisfactory because it fails to explain anything and it is probably more complex than currently represented. The W.M.M represents a shift in our understanding of memory as one activity, to be able to distinguish an array of different kinds of memory. The MSM offered a first step in the right direction in identifying the sub-components of memory and linking these with areas of the brain. However the W.M.M has continued the refinement by identifying further components of memory. This suggests that the W.M.M has been influential in providing a further understanding of how the memory works. Another strength of the W.M.M is the fact that it offers a better account of STM than in the MSM. This is because it moves from describing immediate as a unitary store to one with a number of components. In comparison with the MSM, the W.M.M includes verbal rehearsal as an optional process rather than the only means by which information is kept in immediate memory. The W.M.M also emphasises process more than the MSM, which emphasised structure. The W.M.M suggests that immediate memory holds the most recently activated portion of LTM, rather than portraying STM as a way station on the way to and from LTM. Working memory moves the activated elements in and out of brief, temporary storage. ...read more.