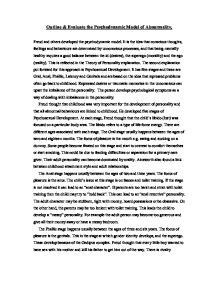 Outline & Evaluate the Psychodynamic Model of Abnormality. Freud and others developed the psychodynamic model. It is the idea that conscious thoughts, feelings and behaviours are determined by unconscious processes, and that being mentally healthy requires a good balance between the id (desires), the superego (morality) and the ego (reality). This is reflected in the Theory of Personality explanation. The second explanation put forward for this approach is Psychosexual Development. It has five stages and these are Oral, a**l, Phallic, Latency and Genitals and are based on the idea that repressed problems often go back to childhood. Repressed desires or traumatic memories in the unconscious can upset the imbalance of the personality. The person develops psychological symptoms as a way of dealing with imbalances in the personality. Freud thought that childhood was very important for the development of personality and that all abnormal behaviours are linked to childhood. He developed five stages of Psychosexual Development. At each stage, Freud thought that the child's libido (l**t) was focused on a particular body area. The libido refers to a type of life force energy. There are different ages associated with each stage. The Oral stage usually happens between the ages of zero and eighteen months. The focus of pleasure is the mouth e.g. eating and sucking on a dummy. ...read more.

It was mainly middle class Vietnamese women so can be seen as ethnocentric. Freud also developed the Electra complex to explain this stage in relation to girls but it does not explain it fully it is seen more as an after thought. Nevertheless, Freud believes that if the Phallic stage is not successfully resolved, this can lead to being incapable of loving others or being vain and proud. Later research has suggested that if the child identifies with the opposite s*x parent, this can lead to homosexuality. The Latency Period happens usually between six years and puberty. There is no focus on a specific body area. Rather the child focuses on school and friends. However, this time has been researched less than many of the other stages. The Genital stage happens from adolescence onwards. The focus is on the genitals. A healthy individual who has resolved the Oedipus complex can move into this stage and make opposite s*x friends. They also have healthy heterosexual relationships. However, these stages are not set in stone as each chid is different. It also focuses too much on infant s****l desires. The theory of personality explanation was created by Freud through clinical work with mentally disordered patients. Freud believed that problems arose directly from the dynamics of the personality (psyche), rather than from physical causes. ...read more.

Anorexia may result from s****l abuse in childhood. The sufferer develops a fear of s*x or growing up. Self-starvation keeps them in a child like state. There is some evidence to suggest that childhood experiences affect adult mental health. For example, many people who are abused go on to develop psychological problems. If the problems stem form repressed memories or conflicts stemming from childhood, then these must be brought to consciousness and dealt with it the person is going to get better. In psychoanalysis, the therapist investigates the client's unconscious through free association, dream analysis and projective tests. They identify the unconscious conflicts and help the client to bring them to the surface (catharsis). They then help the client to work through and deal with their repressed feelings. These treatments work quite well for mild disorders e.g. anxiety or depression. However, it takes a long time on average it takes two or more years so is time consuming and expensive. It can also result in the formation of false memories which may make things worse, not better. For example, in cases of abuse. A great disadvantage of these treatments is that they encourage the client to become dependent on the therapist and this may not be necessarily good for them. In conclusion this approach ignores biological and cognitive factors involved in abnormal behaviour. From twin studies it was shown that identical twins had more of a concurrence to develop eating disorders and schizophrenia than non identical twins. ?? ?? ?? ?? ...read more.

The writer has a good grasp of the psychodynamic model and Freud's contribution to this. A lot of research has been carried out and most of the main points have been covered. It might be helpful to define what is 'abnormal' at the beginning of the written piece and then keep referring to this throughout in relation to the stages of development. Also 'psychic determinism' is a good term to use to explain the pyschodynamic model.