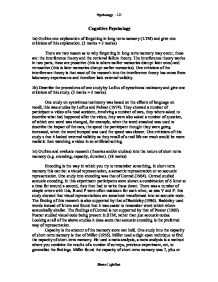 Outline one explanation of forgetting in long-term memory (LTM) and give one criticism of this explanation.

One study into encoding was that of Conrad (1964). Conrad studied acoustic encoding. In this experiment participants were shown a combination of 6 letter at a time for around a second, they then had to write these down. There was a number of simple errors with this, B and P were often mistaken for each other, as was V and P. this study showed that visual representations are somehow transformed into an acoustic code. The finding of this research is also supported by that of Baddeley (1986). Baddeley used words instead of letters and found that it was easier to remember word which where acoustically similar. The findings of Conrad is not supported by that of Posner (1969). Posner studied visual code being present in STM, rather than just acoustic codes. Looking at all of the above studies it does seem that acoustic encoding is the preferred way of representation. ...read more.

Short-term memory can also be influenced by other variables, such as stress, mood ect. Duration is the length of time the memory store can hold the information. One study into the duration of short-term memory is that of Peterson & Peterson (1959). Peterson & Peterson presented their participant with a number of trigrams, three lettered, unrelated consonants, they were then told to count backwards in three, to attempt them to forget these trigrams, their findings showed that information quickly disappears from the short-term memory. So the duration of short term memory from this study is said to be 3 - 18 seconds. The advantages of this study was that it developed a future technique known as the Brown-Peterson technique. We are also able to establish cause and effect between the IV &DV. Some disadvantages of this study are that it lacks external validity and the potential effects of other variables were not taken into consideration. ?? ?? ?? ?? Psychology - LH Shane Lightfoot ...read more.