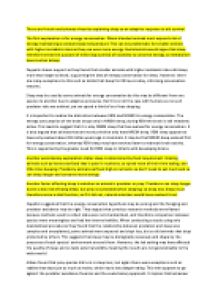 Outline one or more evolutionary explanations for the functions of sleep

﻿There are 4 main evolutionary theories explaining sleep as an adaptive response to aid survival. The first explanation is for energy conservation. Warm blooded animals must expend a lot of energy maintaining a constant body temperature. This can be problematic for smaller animals with higher metabolic rates as they use even more energy. Evolutionists would argue that sleep therefore serves the purpose of enforcing a period of inactivity to conserve energy, as metabolism lowers when asleep. Zeppelin shows support as they found that smaller animals with higher metabolic rates did sleep more than larger animals, supporting the idea of energy conservation for sleep. However, there are many exceptions to this such as sloths that sleep for 20 hours a day, criticising conservation theories. Sleep may be used by some animals for energy conservation by this may be different from one species to another due to adaptive pressures. ...read more.

Another evolutionary explanation states sleep is determined by food requirement. Grazing animals such as horses eat food that is poor in nutrients, so spend most of their time eating, and little time sleeping. Predatory animals eat food high in nutrients so don?t need to eat much and so can sleep longer and conserve more energy. Another factor affecting sleep is whether an animal is predator or prey. Predators can sleep longer due to a low risk of being killed, but prey is vulnerable when sleeping, so sleep less. Sleep must therefore serve a vital function, as if it did not, natural selection would have evolved it out. Capellini suggested that the energy conservation hypothesis may be wrong and the foraging and predator avoidance may be right. They argued that previous research methods were flawed because methods used to collect data were not standardised, and therefore comparison between species were meaningless and had low internal validity. ...read more.

Meddis proposed the waste of time hypothesis, suggesting sleep serves the purpose of helping animals avoid predators when they may be most vulnerable by sleeping in darkness and hidden. It endures they stay still when having nothing better to do. Siegal concurred with this view, arguing being away would be riskier due to exposure. The only possible explanation could be sleep enables energy conservation and avoiding dangers. However, the evolutionary approach fails to address some key aspects of sleep, such as why we long for sleep when sleep deprived. Horne suggests a solution in a combined approach. He suggested a distinction between core and optional sleep. Core sleep being SW, that is required for body and brain processes, optional sleep is REM and is dispensable like conserving energy. Restoration theorists would argue against this and city the link between REM and brain development, suggesting even REM serves a purpose beyond simply wasting time. ...read more.