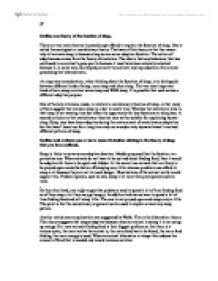 Outline one theory of the function of sleep.

Outline one theory of the function of sleep. There are two main theories in psychology offered to explain the function of sleep. One is called the ecological or evolutionary theory. The basis of this theory is that the reason why all animals sleep is because sleep serves some adaptive function. The notion of adaptiveness comes from the theory of evolution. The idea is that any behaviour that has continued in an animal's gene pool is because it must have been naturally selected because it, in some way, has helped promote the survival and reproduction of an animal possessing that characteristic. An important consideration, when thinking about the function of sleep, is to distinguish between different kinds of sleep: core sleep and other sleep. ...read more.

Meddis proposed that the function is a protective one. When animals do not have to be out and about finding food, then it would be adaptive for them to be quiet and hidden. At the same time animals that are likely to be preyed upon would be better off sleeping very little whereas predators can afford to sleep a lot because they are not in much danger. Observations of the animal world would support this. Predator species, such as cats, sleep a lot more than prey species such as mice. , On the other hand, one might argue that predators need to spend a lot of time finding food so of they sleep a lot they may go hungry. In addition herbivores have to spend a lot of time finding food and will sleep little. ...read more.

Certainly some aspects of sleeping are adaptive; however, it may not be the main function of sleep. The alternative theory is the restoration theory, which proposes that all animals sleep because certain functions take place during sleep which help the animal restore itself physiological and psychological restoration can take place when an animal is relaxing, so why then is it necessary to become unconscious during sleep? In terms of protection one would think it is more adaptive for animals not to lose consciousness. Perhaps the reason is that for good restoration to take place the brain has really got to go off-line. Neither theory accounts for why animals lose consciousness when sleeping. Sleeping my not be necessary for restoration, and from an adaptive point of view it makes little sense. Horne made the important point that sleep probably serves different purposes in different species. Thus, no single theory is likely to be adequate. JT ...read more.

Knowledge and understanding of the topic is accurate with a range of relevant material. Structure is reasonably coherent. 3 Stars