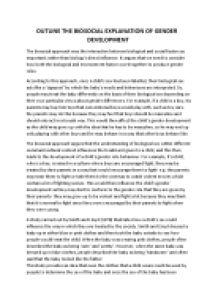 ﻿OUTLINE THE BIOSOCIAL EXPLANATION OF GENDER DEVELOPMENT The biosocial approach sees the interaction between biological and social factors as important, rather than biology?s direct influence. It argues that we need to consider how both the biological and environment factors work together to produce gender roles. According to this approach, once a child?s sex has been labelled, their biological sex acts like a ?signpost? by which the baby?s needs and behaviours are interpreted. So, people may treat the baby differently on the basis of their biological sex depending on their own particular views about gender differences. For example, if a child is a boy, his parents may buy him toys that conventional boys would play with, such as toy cars- ...read more.

The biosocial approach argues that the understanding of biological sex within different social and cultural context influences the treatment given to a child, and this then leads to the development of a child?s gender role behaviour. For example, if a child, who is a boy, is raised in a culture where boys are encouraged fight, they may be treated by their parents in a way that would encourage them to fight- e.g. the parents may train them to fight or take them to the cinemas to watch violent movies which contain a lot of fighting scenes. This would then influence the child?s gender development as they may start to conform to the gender role that they are given by their ...read more.

When the baby was wearing pink clothes, people often described the baby as being ?cute? and ?pretty?. However, when the same baby was dressed up in blue clothes, people described the baby as being ?handsome? and often said that the baby looked like the father. This study provides an idea that even the clothes that a child wears could be used by people to determine the sex of the baby and once the sex of the baby has been established, it would determine the way a child is treated by people. This would then affect the child?s gender development as they may end up conforming to the gender role that they are given by the society. ...read more.