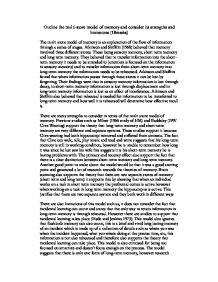 Outline the multi-store model of memory and consider its strengths and limitations (18marks) The multi store model of memory is an explanation of the flow of information through a series of stages. Atkinson and Shiffrin (1968) believed that memory involved three different stores. These being sensory memory, short term memory and long term memory. They believed that to transfer information into the short-term memory it needs to be attended to (attention is focused on the information in sensory memory) and to transfer information from short-term memory into long-term memory the information needs to be rehearsed. Atkinson and Shiffrin found that when information passes through these stores it can be lost by forgetting. ...read more.

however he is unable to remember how long it was since he last saw his wife this suggests it is his short-term memory he is having problems with. The primacy and recency effect also support the fact that there is a clear distinction between short-term memory and long-term memory. Another good point to make about the model would be that it was a good starting point and generated a lot of research towards the theories of memory. Brain scanning also supports the theory that there are two separate stores of memory (short term and long term) it supports this by showing that when an individual works on a task in short term memory the prefrontal cortex is active however when working on a task in long term memory the hippocampus is active. ...read more.

This model is also criticised for being too focused on structure and doesn't focus enough on the process. The model suggests that there is only one form of long-term memory, however research suggests that there are different forms of long-term memory such as semantic, episodic and procedural memory. In conclusion to the multi store model of memory although I think that it was a good starting point and that it got other psychologists to ethicise and focus on memory, other models do a better job of explaining memory. This model is very simple and could have developed into a more complex and detailed model. I think all the limitations of this model are relevant and stand out. ...read more.

A reasonable balanced argument on both sides to evaluate the Multi Store Model. Develop the points mentioned and proofread.