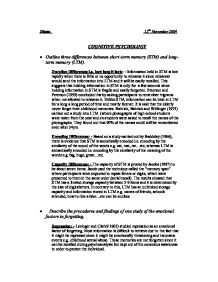 Diana 12th November 2004 COGNITIVE PSYCHOLOGY * Outline three differences between short-term memory (STM) and long-term memory (LTM). Duration Differences i.e. how long it lasts: - Information held in STM is lost rapidly when there is little or no opportunity to rehearse it since rehearsal would send the information into LTM and it will be easily recalled. This suggests that holding information in STM is only for a few seconds since holding information in STM is fragile and easily forgotten. Peterson and Peterson (1959) concluded this by asking participants to remember trigrams when not allowed to rehearse it. Unlike STM, information can be held in LTM for a long a long period of time and mostly forever. It is said that the elderly never forget their childhood memories. Bahrick, Bahrick and Witlinger (1975) carried out a study into LTM (where photographs of high school students were taken from the year and ex-students were asked to recall the names of the photographs. They found out that 90% of the names could still be remembered even after 34yrs. ...read more.

say what came into their minds. To make it a repeated measures experimental design, the participants experienced two conditions. Some of the words had neutral meaning e.g. tree, window...etc. and others had a high negative emotional content e.g. war, fear...etc. Part two of the study followed shortly after part one. Participant's recalls of the words were tested. The original neutral or negative emotionally charged words were presented to them as cues and they were asked to recall their associations. Findings: - Levinger and Clark found that the participants had more difficulty in producing associations to the negative emotionally charged words than to the neutral words. It also took them a longer period of time since their recall was slower. The galvanic skin response data showed that the emotionally charged words created more emotional arousal, which may have led to them, being repressed into the unconscious and this made the speed of recall slow. * Outline and evaluate one alternative model to the multi-store model of memory (e.g. working memory, levels of processing). ...read more.

to make an extensive use of the central executive. They did this by asking carrying out verbal reasoning tasks on participants to decide whether each in a set of sentences provided a true or false description of the letter pair that followed. The predictions were that: 1. Two tasks cannot be performed successfully together if they make use of the same component. 2. If two tasks make use of different components, it will be possible to perform them as well together as separated. The working model also views verbal rehearsal as an optional process that occurs within the articulatory or phonological loop. This makes it more realistic than the central importance of verbal rehearsal in the multi-store model. On the contrary, not much information is known about the central executive and although it has a limited capacity, this capacity has not been measured accurately. It is also argued that the central executive is "modality-free" (i.e. it does not rely on any specific way of receiving information, such as sound or vision). It is also used in different processing operations but the precise details and its functioning are unknown. ...read more.