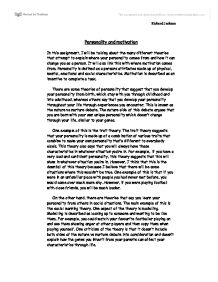 Personality and Motivation. In this assignment, I will be talking about the many different theories that attempt to explain where your personality comes from and how it can change you as a person. It will also link this with where motivation comes from.

Personality and motivation In this assignment, I will be talking about the many different theories that attempt to explain where your personality comes from and how it can change you as a person. It will also link this with where motivation comes from. Personality is defined as a persons attributes made up of physical, mental, emotional and social characteristics. Motivation is described as an incentive to complete a task. There are some theories of personality that suggest that you develop your personality from birth, which stay with you through childhood and into adulthood, whereas others say that you develop your personality throughout your life through experiences you encounter. This is known as the nature vs nurture debate. The nature side of this debate argues that you are born with your own unique personality which doesn't change through your life, similar to your genes. One example of this is the trait theory. The trait theory suggests that your personality is made up of a combination of various traits that combine to make your own personality that's different to everybody else's. This theory also says that you will always have these characteristics in whatever situation you're in. For example, if you have a very loud and confident personality, this theory suggests that this will show in whatever situation you're in. ...read more.

But when they are made captain themselves their natural trait of being very commanding may show through much more. However there is one area that it doesn't cover and that is the aspect of free will, unlike the Matt Jarvis theory. Free will takes into consideration that people make impulse decisions when forced to make a quick choice. There are also three other parts to the Matt Jarvis theory. The four main points are past experiences, genetics, situation and free will. This theory covers all areas and doesn't just say that you get your personality from one place, but in fact a combination of factors. Past experiences effect how you act. For example if you have broken your leg playing football before, you are more likely to pull out of a tackle. The situation part of the theory takes how people behave in different places into consideration. Free will covers for the impulse decisions made on the spot and genetics explains how genes can affect personality, similar to Sheldon's constitutional theory. However this is the most thorough theory and the one that I believe is the most accurate. There are so many influences on your personality that it is impossible to come up with a theory to cover every possibility. But this theory does cover most with the four parts. ...read more.

A person may be insecure about themselves which may cause them to be more motivated to do weightlifting and improve their physique. Another theory is the interactional approach. This suggests that motivation results neither solely from the participants personality, or from the situational factors, such as the coach or training drill. It argues that it is how these two factors interact together. One person may be playing a football game against a close rival and be more motivated because they have a determined personality. However, a different player could be playing in the same situation and be less motivated because they have a shy personality. All people taking part in sport have different reasons for taking art and these reasons may change through their life. For example you may start playing a sport for an intrinsic reason, such as because you enjoy it, however when you improve you may start to play to earn money. You may also play it so much you no longer enjoy it so you start to play to win trophies as more of an incentive. A sports coach could take advantage of this by choosing how people are motivated by sport. If they notice people becoming less motivated, they could set an incentive such as a prize for the best player. This way the payers will keep playing and put more effort into what they're doing. ?? ?? ?? ?? Richard Jackson ...read more.