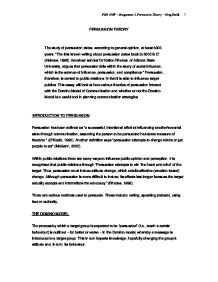 PERSUASION THEORY The study of persuasion dates, according to general opinion, at least 5000 years. "The first known writing about persuasion dates back to 3000 B.C" (Heimes, 1998). American scholar Dr Kelton Rhodes, of Arizona State University, argues that persuasion falls within the study of social influence, which is the science of influence, persuasion, and compliance." Persuasion, therefore, is central to public relations: in that it is able to influence target publics. This essay will look at how various theories of persuasion interact with the Domino Model of Communication and whether or not the Domino Model is a useful tool in planning communication strategies. INTRODUCTION TO PERSUASION Persuasion has been defined as "a successful, intentional effort at influencing another's mental state through communication, assuming the person to be persuaded has some measure of freedom." (O'Keefe, 1990). Another definition says "persuasion attempts to change minds or get people to act" (McGann, 2000). Within public relations there are many ways to influence public opinion and perception. It is recognised that public relations through "Persuasion attempts to win 'the heart and mind' of the target. Thus, persuasion must induce attitude change, which entails affective (emotion-based) change. Although persuasion is more difficult to induce, its effects last longer because the target actually accepts and internalizes the advocacy." (Rhodes, 1999). There are various methods used to persuade. These include: writing, speaking (debate), using fear or authority, THE DOMINO MODEL The process by which a target group is expected to be "persuaded" (i.e., reach a certain behaviour) is outlined - for better or worse - in the Domino model, whereby a message is introduced to a target group. This in turn imparts knowledge, hopefully changing the group's attitude and, in turn, its behaviour. The Domino Model (above), as cited in Grunig and Hunt in 1984, shows four stages in the communications process. It states that in order to bring about a change in behaviour (persuasion) a target group has to: 1. receive a message, 2. process the knowledge, 3. ...read more.

Maslow's Hierarchy of Human Needs is an early model adopted by behavioural scientists to explain in the most general way why human beings behave as they do. As our basic needs for food and shelter are satisfied we move up the hierarchy to the peak of self-actualisation where, because we have everything we need, we get satisfaction from giving to society. Maslow argued that individuals are motivated depending on the extent to which their needs have been fulfilled. The theory was that messages should be targeted to groups according to the level to which their needs had been met. The theory may only be relevant to Western cultures, however, as Eastern cultures, tend to place family (belonginess) on a different level. Maslow's Hierarchy of Human Needs. Ref: Lecture, Kevin Smith, Week 3. Graphic: Greg Smith Personality trait tests recognise people's differences and try to understand their particular traits, with some predictions made about their future. Personal Style indicators are used in marketing to help define target markets more closely than merely by income and place of residence. Psychologists have put forward many other models. One with relevance is fear arousal, one of five "psychological appeals" put forward as persuasive tactics by DeVito (1991), who argues that "we are motivated in great part by a desire to avoid fear. We fear the loss of money, family, friends, love, health, job and just about everything we have and value. We also fear punishment, rejection and failure" (p410). Examples of fear tactics include anti-smoking and drink-driving campaigns. Politicians use fear tactics regularly, particularly during elections. The Liberals played to our fear of being over-run by boat people; the Labor Party played to our fears over higher taxes with the GST. "Moderate amount of fear work best. With low levels the audience is not motivated sufficiently to act. With high levels they become too frightened and tune out" (DeVito, p410). ...read more.

a third fundamental processing strategy in response to an advertisement, referred to as an "experiential processing strategy. where "judgments are not based on thoughts prompted by message content per se but rather on sensations or feelings prompted by the very act of processing" (cited in Strack, 1992). CONCLUSION The Domino model is certainly simplistic, as it assumes that attitudes, and then behaviour, will be altered after information is provided. However, it doesn't recognise that attitudes are formed early in our development and are inherently difficult to change (why is it that drink-driving, anti-smoking and domestic violence programs don't seem to work?). So it can't be assumed that all people will change their attitudes just because they receive information. In fact, many people may not even receive knowledge from the initial message, particularly if they already have heard the message. Given the number of persuasion theories (and they are just that: theories) it is difficult to judge with any certainty their effect on the Domino model. The simplicity of the Domino Model is probably a result of the fact that public relations is, for the most part, an inexact science - a practice that relies on the foibles of human nature. It also flawed in that what applies to a target group, does not necessarily apply to all individuals in that group. Clearly, more quantifiable research is required before either the Domino Model, or any persuasion theory can be considered exact. In fact "to date, no single theory or framework that has been developed has been able to account for all the varied and sometimes conflicting persuasion findings. Presumably, this is because the complex process of persuasion is intricately dependent on a myriad of contextual, situational, and individual difference factors, whereas the theories remain relatively simplistic and narrowly developed" (Meyers-Levy, 1999). As Carl Hovland stated: "to change attitude you have to change opinion. That requires communication". Whether any of the above theories affect the Domino model remain to be truly tested. ...read more.