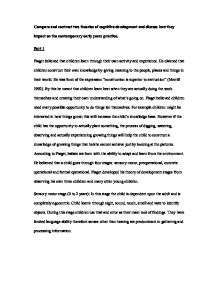 Piaget and Vygotsky theory. Compare and contrast two theories of cognitive development and discuss how they impact on the contemporary early years practice.

Compare and contrast two theories of cognitive development and discuss how they impact on the contemporary early years practice. Part 1 Piaget believed that children learn through their own activity and experience. He claimed that children construct their own knowledge by giving meaning to the people, places and things in their world. He was fond of the expression "construction is superior to instruction" (Merrill 1992). By this he meant that children learn best when they are actually doing the work themselves and creating their own understanding of what's going on. Piaget believed children need every possible opportunity to do things for themselves. For example children might be interested in how things grow; this will increase the child's knowledge base. However if the child has the opportunity to actually plant something, the process of digging, watering, observing and actually experiencing growing things will help the child to construct a knowledge of growing things that he/she cannot achieve just by looking at the pictures. According to Piaget, babies are born with the ability to adapt and learn from the environment. ...read more.

He suggests that language is an important tool in children's learning and they increasingly use it to guide their thinking. Vygotsky argued that Piaget ignored the major impact of cultural sign system on development by focusing on the child as solitary thinker. He thinks that concepts, language, voluntary attention and memory are mental function which come from the culture and begins with interaction between the child and another person. Each of these functions appears twice in a child's development, first as shared between the child and the adult (social) and then within the child (psychological). Vygotsky's work shows that social and cognitive development work together and builds on each other. Like Piaget he also believed that knowledge is constructed from personal experiences, however he thought that the personal and social experience cannot be separated. The world children live in is shaped by their families, communities, socioeconomic status, education and culture. One of the most important concepts of Vygotsky's theory is that of the zone of proximal development. ...read more.

Sensitivity to children's readiness to learn: Piaget believed that children's learning experience I built on their current thinking. Teachers watch and listen to their students, introducing experiencing that allow them to practice newly schemas and challenge their incorrect ways of thinking. Acceptance of individual differences: Piaget believed that all children go through the same stages but at different rates. Therefore teachers should plan activities for individuals and small groups rather than for the whole class. According to Vygoysky's theory, children's level of knowledge is increased by interacting with other children and imitating their parent or teachers. Vygotsky's theory suggests that there are three ways in which learning is passed along to individuals. Imitative learning is the first, where the child copies another person. Second is instructed learning, where a child recalls direction given by a teacher and then puts it into play, and the third is collaborative learning. Collaborative learning happens when a peer group cooperates to learn or achieve a specific goal while working to understand one another. In nurseries children often talk aloud to themselves as they try to understand something. This self speech helps them to work things out in their own minds. ...read more.

The writer gives a strong response to the question, clearly outlining two theories of cognitive development (PiagetÃ¢â‚¬â„¢s and VygotskyÃ¢â‚¬â„¢s), as well as analysing their effects on contemporary early years practice, generally the critical analysis is of a high standard but ...

The writer gives a strong response to the question, clearly outlining two theories of cognitive development (PiagetÃ¢â‚¬â„¢s and VygotskyÃ¢â‚¬â„¢s), as well as analysing their effects on contemporary early years practice, generally the critical analysis is of a high standard but in places the student would benefit from more depth in their description to hit the top marks. The essay question requires the student to Ã¢â‚¬Å“compare and contrastÃ¢â‚¬Â which is done successfully Ã¢â‚¬â€œ e.g. Lev Vygotsky also believed that children are active seekers of knowledge, but he emphasized that rich, social and cultural contexts strongly affect their thinking - this example shows that the student is not just describing one and then the other, but can analyse the similarities and differences between the two theories. The second requirement of the essay was to discuss the implications in early learning settings for these theories which are also addressed clearly (e.g. Discovery learning, acceptance of individual differences, collaborative learning), I am slightly wary of the structure used here (namely the use of sub-headings Ã¢â‚¬ËœPart 1Ã¢â‚¬â„¢ and Ã¢â‚¬ËœPart 2Ã¢â‚¬â„¢ to separate these two sections) since in a typical high-grade essay sub-headings are not necessary and the two sections should flow naturally, as more of a discussion Ã¢â‚¬â€œ for example, begin the paragraph with Ã¢â‚¬ËœBoth these theories have real-world implications for early learning settingsÃ¢â‚¬Â¦Ã¢â‚¬Â - However, this will depend on specific requirements of individual essays.

As mentioned, the level of analysis is generally strong, the student follows a nice structure of Ã¢â‚¬Å“point, explanation, and exampleÃ¢â‚¬Â (see paragraph on discovery learning for a nice demonstration of this) Ã¢â‚¬â€œ this is a fail-proof way to ensure you are providing enough depth in your essay, for each item you want to discuss name the point (e.g. discovery learning), give an explanation for it (e.g. important for a child to experience the things they are learning about), and give an example (e.g. see a cow in real life!), to fully ensure you are both clear for the reader, and the reader is certain you understand the concept yourself. Whilst the studentÃ¢â‚¬â„¢s concluding statements for Ã¢â‚¬ËœPart 1Ã¢â‚¬â„¢ are strong (e.g. In conclusion Vygotsky agreed with the development that Piaget proposed. However being a Marxist he strongly believed that human beings can only be understood in the context of their social and historical environment) since they summarise the information well and draw to close, this is lacking for Ã¢â‚¬ËœPart 2Ã¢â‚¬â„¢. Whilst, implications for both theories are discussed there is no finalising statement to draw the entire essay to a close, which is an important part of any essay structure.

Generally the spelling and grammar is good, although there are some occasional problems Ã¢â‚¬â€œ for example, the sentence Ã¢â‚¬Å“Teachers watch and listen to their students, introducing experiencing that allow them to practice newly schemas and challenge their incorrect ways of thinkingÃ¢â‚¬Â obviously contains silly mistakes that could be easily be fixed by proof-reading, but in this case has instead led to sentence that makes no sense to the reader. Correct technical and psychological terminology is used, e.g. symbolic play, sensory motor stage, concrete operational, etc. however this could at times use more explanation, for instance in the concrete operation stage, the writer states that the child understands conservation Ã¢â‚¬â€œ I would suggest following this with a brief explanation of what conservation is as it is important to assume that your reader would not know.