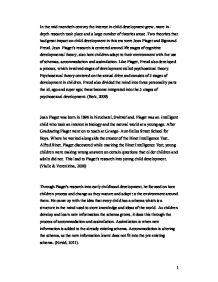 In the mid twentieth century the interest in child development grew, more in-depth research took place and a large number of theories arose .Two theorists that had great impact on child development in this era were Jean Piaget and Sigmund Freud. Jean Piaget's research is centered around life stages of cognitive developmental theory, also how children adapt to their environment with the use of schemas, accommodation and assimilation. Like Piaget, Freud also developed a process, which involved stages of development called psychosexual theory. Psychosexual theory centered on the s****l drive and consists of 5 stages of development in children. Freud also divided the mind into three personality parts the id, ego and super ego; these become integrated into the 5 stages of psychosexual development. (Berk, 2009) Jean Piaget was born in 1896 in Neuchatel, Switzerland. Piaget was an intelligent child who took an interest in biology and the natural world at a young age. After Graduating Piaget went on to teach at Grange- Aux-Belles Street School for Boys, Where he worked along side the creator of the Binet Intelligence Test, Alfred Binet. Piaget discovered while marking the Binet Intelligence Test, young children were making wrong answers on certain questions that older children and adults did not. This lead to Piaget's research into young child development. ...read more.

He only researched a small number of children, who were all of high social economic status and were educated. Also three of the children researched were his own. This lead to criticism that the research was not valid enough, as he did not research children in other environments and it's hard to generalize his findings to a larger population. Piaget may have under estimated children's abilities. Researches have found that children hold skills at earlier ages than Piaget suggested. Piagets idea of children developing in stages as they mature also has had criticism as research shows that environmental factors and how the child is brought up can play a major role in the development process. (Sutherland, 1992) Sigmund Freud was born 1856 in Moravian town of Freiburg, and was the oldest of 8 children. Freud was a bright child who had planned to study law, instead attending the medical faculty at University of Vienna. He went on to study and find a cure for troubled adults, where the patient talked through their problems of childhood. The goal of this was to realise emotions that had been trapped in the unconscious mind of the adult. Freud believed that s****l life and early childhood development was a factor in troubled adults in adulthood. This research leads to Freud's psychosexual theory. ...read more.

Knowledge and understanding are accurate and reasonably detailed. The structure and organisation of the essay is reasonably coherent although it would benefit from proofreading.4*