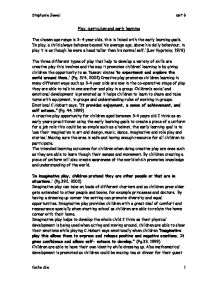 Play, curriculum and early learning The chosen age range is 3- 4 year olds, this is linked with the early learning gaols. 'In play, a child always behaves beyond his average age, above his daily behaviour, in play it is as though he were a head taller then his normal self.' (Lev Vygotsky, 1978) The three different types of play that help to develop a variety of skills are creative play this involves and the way it promotes children' learning is by giving children the opportunity to as Tassoni states 'to experiment and explore the world around them.' (Pg. 374, 2002) Creative play promotes children learning in many different ways such as 3-4 year olds are now in the co-operative stage of play they are able to talk to one another and play in a group. Children's social and emotional development is promoted as it helps children to learn to share and take turns with equipment, in groups and understanding rules of working in groups. Emotional C Hobart says, "It provides enjoyment, a sense of achievement, and self esteem." (Pg. 44, 1999) A creative play opportunity for children aged between 3-4 years old I think as an early years practitioner using the early learning gaols to create a piece of a uniform for a job role this could be so simple such as a helmet, the early learning goal is to 'use their imagination in art and design, music, dance, imaginative and role play and stories.' ...read more.

The type of activities that promote physical play could be to bikes and tricycles or pushing prams. And children are able to move around as part of the game while using co-operative play together. Children are able to learn to share, take turns and learn understanding for space. Manipulative play has loads of different types of play for children to develop skills, according to Tassoni "manipulative play will also support the curriculum plans for a playgroup, nursery or school." (Pg. 390, 2002) One of the early years goals links to manipulative play as children use their hand and pincer grasp, this is to handle tools, objects, construction and malleable material safely and with increase control. When doing physical activities or any activities for that matter the child needs to find it interesting the way this can be done is presenting the equipment attractively, letting children make their own choices and desertions. I believe as an early year's practitioner children should learn from their experiences and the only way this can be done is by letting children experiment. Health and safety is the top priority this include space for children to move, making sure all children can participate, along with age and stage appropriate. Ways in which early year's practitioners should meet children's individual needs is to promote their learning according to each individual child. Adult's roles I believe are to support the children I agree with P Tassoni "Children determine their own play and the adult's role is to give opportunity and guidance where necessary. ...read more.

Children have limited choices while following the early learning goals but I think it gives children independence and preparation. Frobel (1782-1852) insisted that the education of young children was vital to their development as individuals and to social reform. The way in which early years practitioners and other childcare workers can extend children's play is by encouragement and providing children with enough resources to use their own imagination which is one of the three types of play used. Childcare workers need to be aware of children's individual needs as they may not be able to say they can not hear see the white board. Adult-led activities can help children not to become frustrated with the activity and give up, when adults intervene in the right manor children do not feel they are being told what to but the adult is helping and encouraging. During play children learn many different skills: * Developing language * Science * Exercising there bodies * Co-ordination * Their own personalities * Forming friendships and being socialable * Fun * Letting their emotions out through the activities * Taking turns and sharing * Developing imagination Susan Isaacs (1885-1948) placed high value on play and is thought to believe that children through play would have a balanced view of life and play encouraged children to show their true feelings. I agree that children show their emotions through play and are able to learn from it by becoming a whole child. ...read more.