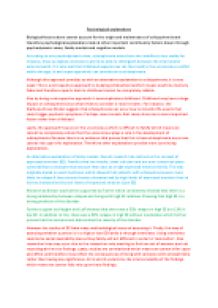 ﻿Psychological explanations Biological factors alone cannot account for the origin and maintenance of schizophrenia and therefore psychological explanations look at other important contributory factors shown through psychodynamic views, family models and cognitive models. According to one psychodynamic view, schizophrenia arises from the inability to test reality for instance, draw up logical conclusions and to be able to distinguish between the internal and external world. It is also said that childhood experiences can then lead to the unconscious conflict within the ego, id and super-ego which can contribute to schizophrenia. Although this approach provides us with an alternative explanation to schizophrenia, it is very weak. This is a retrospective approach to studying schizophrenia which means overtime memory fades and therefore reports back to childhood cannot be completely reliable. Also by being a retrospective approach it overemphasises childhood. Childhood may have a large impact on schizophrenia but what it fails to consider is recent events. For instance, the Diathesis-Stress Model suggests that schizophrenia can occur due to stressful life events that could trigger psychotic symptoms. Perhaps recent events that cause stress are a more important factor rather than childhood. ...read more.

In addition to this, there was a 92% relapse in high EE without medication which further proves that the environment determines the severity of the disorder. However the studies of EE have many methodological issues of assessing it. Firstly, the way of assessing whether a person is in a high or low EE family is through interviews. Using interviews could arise social desirability bias as they family will act different in order to ?look better?. Also researcher bias may occur due to the researcher only wanting to find one set of answers and not recording all the true findings. Lastly, studies are correlational which means we cannot infer cause and effect and therefore may reflect the consequences of living with someone with schizophrenia rather than having any significance. All in which undermine the internal validity of the findings which means we cannot fully rely upon these findings. Also Kavanagh found that high EE patterns have also been found in families of patients with other disorders such as depression and eating disorders. Therefore, it isn?t a defining characteristic of families with a schizophrenic member. ...read more.

Which results in delusional thoughts which are then interpreted as originating externally rather than from memory. Becker et al found that schizophrenics struggled to integrate moment-to-moment sensory input with stored memories supporting Helmsley?s cognitive model. Cognitive explanations appears to provide a reasonable explanation for positive symptoms but do not explain negative symptoms. However, it?s not clear whether the cognitive dysfunction is a cause or effect of the disorder. Therefore, cognitive models may only be descriptive; explaining the symptoms of schizophrenia rather than explaining them. Similarly, many brain-damaged patients have problems with attention or with the relationship between memory and perception. Despite having these cognitive deficits, they fail to develop the symptoms of schizophrenia and so this challenges the cognitive explanations. Overall, the psychological explanations have implications for treatments. For instance, CBT is an effective treatment for schizophrenia focussed through the cognitive theories. If the treatment is effective then the theory must be correct to some extent. Lastly, the psychodynamic and family models favour the nurture debate compared to cognitive models which favours nature. Due to favouring one side, the approaches become reductionistic as it either fails to consider the environment or biology. Therefore, a more holistic approach should be considered in order to be completely valuable. ...read more.