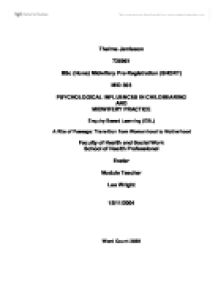 Psychological influences in childbearing and midwifery practice - A Rite of Passage: Transition from Womanhood to Motherhood

Thelma Jamieson 728961 BSc (Hons) Midwifery Pre-Registration (SHORT) MID 303 PSYCHOLOGICAL INFLUENCES IN CHILDBEARING AND MIDWIFERY PRACTICE Enquiry Based Learning (EBL) A Rite of Passage: Transition from Womanhood to Motherhood Faculty of Health and Social Work School of Health Professional Exeter Module Teacher Lee Wright 15/11/2004 Word Count 2589 This report was triggered by a video entitled 'The Baby Blues' (BBC 1995) which was part of an enquiry-based-learning module. The focus of the enquiry will be on the midwife's role in identifying the psychological factors that put women at risk of developing postnatal depression highlighting strategies such as 'primary prevention' and 'early intervention' (Austin 2003) to improve outcomes in mortality, morbidity and encourage positive mother-baby relationships. The transition from womanhood to motherhood is a 'rite of passage' (Van Gennep 1909, 1969) and can contribute to personal growth and be wonderful, but it can also be a time that can predispose women to mental disorders. Barnes (2002) describes the transition to parenthood as an 'experience of crisis proportion'. Affective disorders can range from mild transitory 'blues' through to severe postnatal depression, puerperal mania, and psychosis (Brockington 1996). The Department of Health (DOH 2002) takes the view that maternal mortality due to mental illness around pregnancy and childbirth has the 'potential' to be 'prevented', by identifying mothers at risk during the antenatal period (DOH 2002). This poses the question; what can midwives do antenatally to identify risk factors and prepare woman for the adaptation to motherhood, thereby minimising the risk of them developing postnatal depression. Community midwives are well placed (Carson 2001) to carry out risk assessments throughout the antenatal period referring to other health professionals such as General Practitioners (GP), Health Visitors (HV), Community Mental Health Team (CMHT), and Obstetric Consultants when specialised input is required. At present, there are no valid screening tools for antenatal depression (Austin & Lumley 2003) but that should not stop midwives from developing effective interpersonal relationships with women and their partners using good communication and observational skills to assess women's mental health during antenatal visits. ...read more.

hardiness, mastery and resilience enable people to view life changing events as 'a positive challenge' rather than a 'threat' or 'crisis' * 'Learned helplessness theory' (Seligman 1975) a state whereby individuals spiral into a state of depression or hopelessness when repeated attempts to take control of a novel situation have failed. * 'faulty thinking' (Beck 1976; 1987) Beck's theory is that negative thinking can lead to a depressive state; cognitive behavioural therapy has proved to be a useful treatment in mild to moderate depression, it may even be the treatment of choice (Scott 2001). The cyclical model of depression (fig 2, Fedouloff) demonstrates the multifactor elements of depression. (Figure 2) * 'biological events' Studies have shown that rapidly fluctuating hormones (Dalton 1980) and certain brain chemicals called neurotransmitters play an important role in regulating moods and emotions. Neurotransmitters involved in depression include norepinephrine, dopamine, and serotonin (Newport et al 2004); these are also involved in breastfeeding and fluctuate during lactation. Thyroid dysfunction (Harris et al 2002) has also been linked to postnatal depression. These useful theories related to PND can enlighten midwives understanding of the psychological and biological issues that can lead to postnatal non-psychotic disorders. Risk factors for PND are evident in many research studies (Beck 1996, 2002, O'Hara & Swain 1996, Wilson et al 1996) 75% of well-designed cohort studies (Pope 2000) classified the following factors as being strongly associated with PND: * History of psychopathology and psychological disturbances during pregnancy or close family member with history of PND * Low level of social support * Poor marital/personal relationship * Recent adverse life experiences such as bereavement, divorce, separation, change of location and or job * Baby blues" that do not resolve within two weeks of onset. A study by Hagen (2002) looks at PND from an evolutionary perspective, called the 'defection hypothesis for PND'; Hagen postulates that women with PND are unconsciously using depression as a defensive response, a bargaining tool. ...read more.