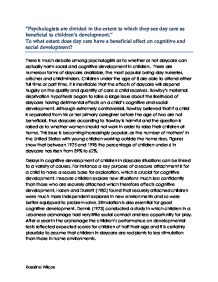 &quot;Psychologists are divided in the extent to which they see day care as beneficial to children's development.&quot; To what extent does day care have a beneficial effect on cognitive and social development?

"Psychologists are divided in the extent to which they see day care as beneficial to children's development." To what extent does day care have a beneficial effect on cognitive and social development? There is much debate among psychologists as to whether or not daycare can actually harm social and cognitive development in children. There are numerous forms of daycare available, the most popular being day nurseries, cr�ches and childminders. Children under the age of 8 are able to attend either full time or part time. It is inevitable that the effects of daycare will depend hugely on the quality and quantity of care a child receives. Bowlby's maternal deprivation hypothesis began to raise a large issue about the likelihood of daycare having detrimental effects on a child's cognitive and social development. Although extremely controversial, Bowlby believed that if a child is separated from his or her primary caregiver before the age of two are not beneficial, thus daycare according to Bowlby is harmful and the question is raised as to whether women should not work in order to raise their children at home. This issue is becoming increasingly popular, as the number of mothers' in the United States with young children working outside the home rises. Figures show that between 1975 and 1998 the percentage of children under 6 in daycare has risen from 39% to 62%. Delays in cognitive development of children in daycare situations can be linked to a variety of causes. For instance a key purpose of a secure attachment is for a child to have a secure base for exploration, which is crucial for cognitive development. Insecure children explore new situations much less confidently than those who are securely attached which therefore effects cognitive development. Hazen and Durrett (1982) found that securely attached children were much more independent explorers in new environments and so were better equipped to problem solve. ...read more.

Harvey (1999) used a number of standardised psychological tests along with data from the National Longitudinal Survey of Youth. He aimed to evaluate the differences in language development, academic achievement and self-esteem and found no information that appeared to be statistically significant of any kind. There was information collected that demonstrates positive but indirect effects on cognitive development of children via parenting, for example Pedersen et al (1982). This study involved comparing interactions between working mothers and their children compared with stay-at-home mothers. Findings showed that fulltime working mothers stimulate infants more when playing than the mothers who do not work. The employment status of the mother also seems to affect the way in which the father interacts with the child. For instance, working mothers appear to be more active in interactions than their husbands however fathers who have nonworking wives tend to play more than those with working wives. It is possible to explain this by making the assumption that working mothers appreciate their child's company more as they are able to play with them less, this makes for less routine playing and intensive interactions which are exceedingly beneficial for a child's cognitive development. However mothers who do not work, naturally spend more time with their children and so nonworking mothers appreciate any peaceful moments they may have, this causes them to avoid exciting the child too much. Hoffman (1974) believes that it is critical that mother enjoys her job situation whether it is being employed or unemployed. Dissatisfied mothers seem less likely to be adequate parents with content women providing better quality care. Williams (1987) found that work increases a woman's self-esteem and personal value. Schaffer (1993) also concluded that working mothers are more confident in social settings as they appear to be far less stereotyped thus feeling more comfortable. These studies help to support the view that work enables better mothering. ...read more.

With regard to social development daycare is helpful for enriching many aspects of a child's personality and there have been more positive findings. There are also cases however where daycare has shown to cause effects which are negative, such as when children experience behavioural problems or have become less polite and compliant, and more aggressive. But behaviours produced are partly due to cultural variations and behaviours that are likely to have been encouraged by staff. There are also findings to support that these behaviours do not necessarily exist as a result of being in daycare but perhaps because of discord or conflict within their home. It may be true that a number of factors contribute to children achieving less well at daycare than others, and so may well have an effect on attachment. A few examples of these factors which could be very important in a change of attachment style are, a poor quality of care, change of daycare setting, more than ten hours a week of time spent in care, or a mother who is insensitive to her child's needs when the child is at home. Therefore the outcome is inconclusive as it is nearly impossible to test only the effects of daycare. As many other daycare children experience simply indirect effects on social development. Daycare cannot be blamed solely for the effects, as although they are irresolute they hold a lot of importance in the children's social development. The effects of social development and cognitive development appear to depend on how high the quality of care is, the quantity of care and what the age of the child is. Nevertheless significant factors in both cognitive and social aspects of development are the family income, the maternal vocabulary, the home environment and the degree to which the mother stimulates the child cognitively. Moreover, so long as the daycare is of high quality, there will be nothing but positive effects of social and cognitive development. ?? ?? ?? ?? Rosalind Wilcox ...read more.