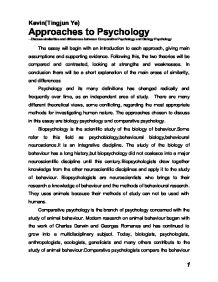 Kevin(Tingjun Ye) Approaches to Psychology --Discuss similarities and differences between Comparative Psychology and Biology Psychology The essay will begin with an introduction to each approach, giving main assumptions and supporting evidence. Following this, the two theories will be compared and contrasted, looking at strengths and weaknesses. In conclusion there will be a short explanation of the main areas of similarity, and differences Psychology and its many definitions has changed radically and frequently over time, as an independent area of study. There are many different theoretical views, some conflicting, regarding the most appropriate methods for investigating human nature. The approaches chosen to discuss in this essay are biology psychology and comparative psychology. Biopsychology is the scientific study of the biology of behaviour.Some refer to this field as psychobiology,behavioural biology,behavioural neuroscience.It is an integrative discipline. The study of the biology of behaviour has a long history,but biopsychology did not coalesce into a major neuroscientific discipline until this century.Biopsychologists draw together knowledge from the other neuroscientific disciplines and apply it to the study of behaviour. ...read more.

However,The biological approach in psychology is highly reductionist in its approach to the complexity of human behavior and emotion. Reducing our feelings and reactions to robot-like behavior is not only unethical, it also ignores the factors in our every day environment - our childhood experiences and the influence and behavior of friends and media - that have been found to affect us.Many drug treatments have unwanted side-effects. Claims, for example, that Prozac can cause violent behavior after taking it, are not uncommon, so the claim that the biological approach can produce effective treatment.Drugs only treat the biologically-visible effects, not the causes of problems. Childhood experiences that cause trauma and depression during adulthood may be better treated by confronting our past than by using anti-depressants. Different with biopsychology,Comparative psychology often utilizes the comparative method to study animal behavior. The comparative method involves comparing the similarities and differences among species to gain and understanding of evolutionary relationships. The comparative method can also be used to compare modern species of animals to ancient species. ...read more.

(Carlson 1990) In conclusion both have fundamental differences and share many attributes, comparative psychologists believe the unconscious has no bearing on behaviour, opposed to biology psychologists' belief that unconscious drives are the reason we behave as we do, one is scientific, the other isn't and they both use very different therapies to treat patients. The similarities between the approaches begin as far back as evolution and Darwin's theory, they share determinism and both fall into the nurture side of the great debate. However, it is fair to say, that even with their many differences and similarities, these approaches have made the biggest contribution to this 'science of the mind' and made history with different therapeutic techniques. Reference lists Simmon Green(1994) Principles of Biopsychology. Lawrence erlbaum associates ltd. John P.J Pinel(1999) Biopsychology . A Pearson Education Company. Gross, Richard et al (2000) Psychology A New Introduction. London. Greengate Publishing. Carlson, Neil R (1990)Psychology 3rd Edition. Needham Heights, Massachusetts. Allyn and Bacon. Ornstein, R. (1988) Psychology - The Study of Human Experience. Florida. Harcourt Brace Jovanovich. Ricker J. (2004) [Online] (URL http://www.scottsdalecc.edu/ricker/psy101/readings/Section_3/images/skinner_box.) Scottsdale Community College (Accessed October 2007) Heffner Dr. Chris (2004) [Online] (URL http://allpsych.com/psychology101/ego.html) (Accessed October 2007) 1 1 ...read more.

This essay is rather basic with little referencing or detail. At times some of the writing is unclear.

The writer gets off to a good start with the introduction. However, the writer needs to explain clearly what the two approaches involve. Once there is a good description of the different approaches, then the writer can go on to look at the strengths and weaknesses of both approaches using references. This would improve the present score.