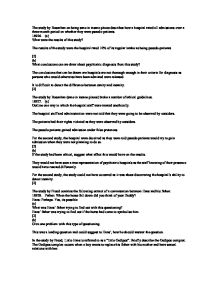 The study by Rosenhan on being sane in insane places describes how a hospital rated all admissions over a three-month period on whether they were pseudo-patients. 18926. (a) What were the results of this study? The results of the study were the hospital rated 10% of its regular intake as being pseudo-patients. [2] (b) What conclusions can we draw about psychiatric diagnosis from this study? The conclusions that can be drawn are hospitals are not thorough enough in their criteria for diagnosis as persons who would otherwise have been admitted were released. It is difficult to detect the difference between sanity and insanity. [2] The study by Rosenhan (sane in insane places) broke a number of ethical guidelines. 18927. (a) Outline one way in which the hospital staff were treated unethically. The hospital staff and administration were not told that they were going to be observed by outsiders. The patients had their rights violated as they were observed by outsiders. The pseudo patients gained admission under false pretences. For the second study, the hospital were deceived as they were told pseudo patients would try to gain admission when they were not planning to do so. [2] (b) If the study had been ethical, suggest what effect this would have on the results. They would not have seen a true representation of psychiatric hospitals as the staff knowing of their presence would have reacted differently. For the second study, the study could not have occurred as it was about discovering the hospital's ability to detect insanity. [2] The study by Freud contains the following extract of a conversation between Hans and his father. 18928. Father: When the horse fell down did you think of your Daddy? Hans: Perhaps. Yes, its possible (a) What was Hans' father trying to find out with this questioning? Hans' father was trying to find out if the horse had come to symbolise him. ...read more.

and 4) Failures on the Alpha test were not reassigned to a more appropriate test (the beta). Hraba and Grant were trying to measure racial preference, awareness and identification as well as the consequences of racial preference and identification. They measured this by replicating Clark and Clark's doll test and by asking the children and their teachers the race of the child's best friend. The requests by pseudo patients were generally met with by lack of response and attention. They were typically ignored. The pseudopatients felt depersonalized and powerless. Eve White's personality was shown to be repressive while Eve Black's was regressive. Both had above average IQ's. The phrasing of the question brought about a change in speed estimate as persons logically associate a word such as smashed with greater speed than contacted. The questions provided the subjects with information since they did not experience the accident first-hand. Both adults and children among the African tribal subjects studied had difficulty perceiving depth in the pictorial material. The groups studied had high numbers of two dimensional perceiver's as opposed to three dimensional perceiver's If Psychologists find a cultural universal of behaviour, it tells us that the behaviour is a feature of all cultures. Four behaviours that can be used to identify Autism are 1)head banging, 2) rocking behaviour, 3) self biting and 4) An obsessive desire for sameness. Washoe was able to use arbitrary symbols and showed semanticity. Washoe demonstrated semanticity by being able to generate a sign such as open to different contexts other than the context in which she learnt the symbol. She demonstrated the arbitary use of symbols for example Washoe was able to sign think-doctor for psychologist. Two ethical issues raised are observing the children unknown to their parents through a one-way mirror. The children, were deliberately irritated by the experimenters, (being denied access to toys). The children were intimidated to stay in a room in stage three of the experiment. ...read more.

Loftus and Palmer looked at memory, and the influence of words on the subjects recollection. Sure problems with memory might have accounted for their faulty recollection, however there is another possible explanation. The subjects were students, and as such might have been influenced by authority, as well as the desire to see the experiment be successful. They may have caught on that the experiment was about eyewitness recollection and so inadvertently sought to make it successful. Being students they could also have been somewhat awed or intimidated by the researcher and did not want their experiment to fail and as such acted accordingly. Aside from this study, If memory could account for all our behaviour why would people consistently make the same mistakes despite past experiences. Gould commented on intelligence and how Yerkes test sought to classify Americans. The American performance on the test may have had nothing to do with intelligence. Cultural knowledge and lack of language ability, as well as unfamiliarity with testing instruments and tests could all have impacted upon the participants. None of these have anything to do with intelligence. Aside from this intelligence cannot account for all that people behave, why then would persons with high IQ's do stupid things. The three studies sought to use cognition to explain human behaviour. The other possible explanations demonstrate that cognitive processes do not provide the only possible account of behaviour. Outside of this Cognitive processes just simply cannot possibly hope to account for all human behaviour. In the study by Raine, Buchsbaum and LaCasse: Describe the type of brain scan that was used. Suggest one problem with this type of brain scan. In his study on intergroup discrimination, Tajfel suggests that belonging to one group and having awareness of another causes discrimination. Describe one way in which the boys were put in groups. Describe how Tajfel's approach may be considered to be reductionist. In the study by Schachter and Singer on emotion: Describe the participants in the study. Why is this study useful? [12] ...read more.