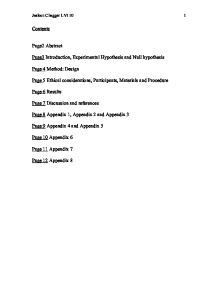 The order of these conditions was allocated to participants by stratified sampling. The list of participants for the sample of this study, was put into alphabetical order and every second person on that list did Condition A first followed by condition B and the remaining sample did condition B first followed by condition A. The same word lists were used for each condition. The environment was controlled by using the same room for each condition , for every participant. Words which were similar to the environment in which the participant, e.g. table, was not used. Words which were significant to the participant, or just everyday words such as cat dog etc., were not used, as they may have effected the results. A stopwatch was used to ensure both groups had the same amount of time to carry out each task. The same brief and the same set of standardised instructions were given to each participant, see appendix 2 and 3, so that all participants were given the same amount of information. The ethical issues I considered in my study were: * Withdrawal from the investigation. This was controlled as each participant was given a set of standardised instructions and was told that they could withdraw at any point during the study. * Protection of participants. This was controlled as each participant was asked to take part in the study and was assured no harm or stress would be bought upon them during the study. ...read more.

This also supports Atkinson and Shiffrin's multistore model of memory, as rehearsal acts as a buffer between sensory memory and long-term memory by maintaining incoming information within STM. I conclude that a distracter task affects the recall of a list of words on the STM. It is easier to recall when a distracter task is not present because rehearsal is not prevented. The main criticism about the study is that it lacks ecological validity. The experiment was carried out in a psychology classroom, unlike a real life experience. One can almost say, to what extent can we generalise these results to everyday memory, as when was the last time you had to remember a list of words. Another criticism maybe that my sample is not representative of 16-18 year olds, as the sample I used were all girls. To improve my investigation I could use a matched pairs design. Two different groups of individuals are used. However, they have been closely matched, or paired, so that the two groups are almost identical. This design itself controls for participant variables, which may otherwise confound the results of the study. For a future study different durations of distracter task can be used to see how this affects the recall on STM. Or length of words and syllables can be changed to find out how many chunks the STM can hold, and what effect it has on LTM. ...read more.