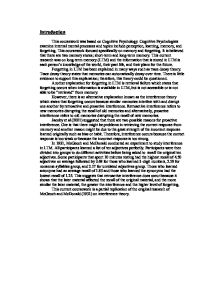 Introduction This coursework was based on Cognitive Psychology. Cognitive Psychologists examine internal mental processes and topics include perception, learning, memory, and forgetting. This coursework focused specifically on memory and forgetting. It is believed that there are two memory stores; short-term and long-term memory. This current research was on long-term memory (LTM) and the information that is stored in LTM is each person's knowledge of the world, their past life, and their plans for the future. Forgetting in LTM has been explained in many ways such as trace decay theory. Trace decay theory states that memories can automatically decay over time. There is little evidence to support this explanation; therefore, this theory could be questioned. Another explanation for forgetting in LTM is retrieval failure which states that forgetting occurs when information is available in LTM, but is not accessible or is not able to be "retrieved" from memory. However, there is an alternative explanation known as the interference theory which states that forgetting occurs because similar memories interfere with and disrupt one another by retroactive and proactive interference. Retroactive interference refers to new memories disrupting the recall of old memories and alternatively, proactive interference refers to old memories disrupting the recall of new memories. Jacoby et al (2001) suggested that there are two possible reasons for proactive interference. One is that there might be problems in retrieving the correct response from memory and another reason might be due to the great strength of the incorrect response learned originally such as bias or habit. Therefore, interference occurs because the correct response is too weak or because the incorrect response is too strong. In 1931, McGeoch and McDonald conducted an experiment to study interference in LTM. All participants learned a list of ten adjectives perfectly. Participants were then divided into groups to do different activities before being asked to recall the original ten adjectives. Some participants that spent 10 minutes resting had the highest recall of 4.50 adjectives on average followed by 3.68 for those who learned 3-digit numbers, 2.58 for nonsense syllables group, and 2.17 for unrelated adjectives group. ...read more.