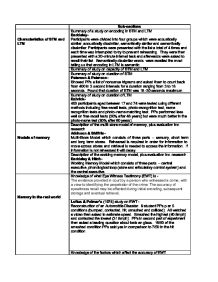 Sub-sections Characteristics of STM and LTM Summary of a study on encoding in STM and LTM Baddeley- Participants were divided into four groups which were acoustically similar, acoustically dissimilar, semantically similar and semantically dissimilar. Participants were presented with the list a total of 4 times and each time was interrupted to try to prevent rehearsing. They were then presented with a 20-minute interval task and afterwards were asked to recall their list. Semantically dissimilar words were recalled the most telling us that encoding in LTM is semantic. Summary of study on capacity of STM and LTM Summary of study on duration of STM Peterson & Peterson- Showed PPs a list of nonsense trigrams and asked them to count back from 400 in 3 second intervals for a duration ranging from 3 to 18 seconds. Found that duration of STM was 18-30 seconds maximum. Summary of study on duration of LTM Bahrick- 400 participants aged between 17 and 74 were tested using different methods including free-recall tests, photo-recognition test, name recognition tests and photo-name matching test. PPs performed less well on free recall tests (30% after 48 years) but were much better in the photo-name test (90% after 60 years). Models of memory Description of the multi-store model of memory, plus evaluation inc. research Atkinson & Shiffrin- Multi-Store Model which consists of three parts - sensory, short term and long term stores. ...read more.

There have been other studies proving/disproving the learning theory, you will need to know them. Shaffer and Emerson- Studied 60 babies every 4 weeks throughout 1st year of life, then again at 18 months. Assessed separation episodes. found babies were clearly attached to those who were not involved in physical care (disproving) Dollard and Miller - found the mother came associated with the removal of unpleasant feelings of hunger, as a form of negative reinforcement (supports operant conditioning) Harlow- Used rhesus monkeys. Separated them from mothers at birth, raising them in isolation cages. Monkeys became distressed when 'baby blanket' was removed (attachment not based on association with food). Harlow provided a wire mother with food and a soft mother without food. Monkeys preferred soft mother; showing they had an innate, unlearned need for contact. (disproves learning theory) Bowlby- evolutionary theory Bowlby believes: Attachment is a behaviour that has evolved because of its survival and reproductive value. Children have an innate drive to become attached to a caregiver because of long term benefits. (Similar to imprinting.) The caregiver will feed and protect the child and increase survival chances. Sensitive period- Hodges and Tizard- longitudinal study, 65 children put in an institution less than 4 months old. 70% said they didn't care deeply about anyone. Early privation has a negative effect on the ability to form attachment's Universality-Tronik et al- studied an African tribe in Efe, they were from extended family. ...read more.

Curtis Studied Genie who had suffered from privation for the first 13 years of her life. Privation caused numerous bad effects including poor physical development (rickets in her legs), lack of speech, emotional tantrums etc. Some progress was made with making attachments but Genie suffered further bad care in foster homes and regressed dramatically. Day care Is a form of care for infants and children offered by someone other than close family, taking place outside the home, children spend all, or part of the day in care but return home at night, Includes nurseries, child-minding. Positive effects of day care Clarke-Stewart et al Found that children in group based day care wee more sociable and better able to negotiate with peers than children cared for at home or by child-minders. EPPE project Indicated positive effects of day care on social development including peer relations. Different forms of day care had an impact - forms with education and care combined = a more positive effect on social development. 3000 UK children aged 3-4, Cognitive development for all children in pre-school was improved in comparison to those who were home schooled. Children are more likely to have adverse social profiles - this increased the risk of anti-social behaviour and could be reduced by high quality pre-school when aged 3-4. Negative effects of day care NICHD Social competence and problem behaviours - including being aggressive, but also challenging behaviour - attention seeking. Day care made children more aggressive and disobedient. ...read more.

The writer has listed a variety of studies for revision. Some have been briefly explained and other experiments have been written in more detail. This is a good study tool although it is just a precis of some of the major studies carried out in cognitive psychology.