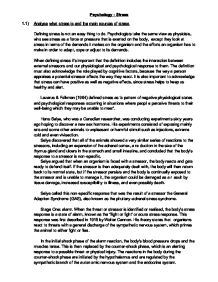 Psychology - Stress 1.1) Analyse what stress is and the main sources of stress Defining stress is not an easy thing to do. Psychologists take the same view as physicists, who see stress as a force or pressure that is exerted on the body, except they look at stress in terms of the demands it makes on the organism and the efforts an organism has to make in order to adapt, cope or adjust to its demands. When defining stress it's important that the definition includes the interaction between external stressors and our physiological and psychological response to them. The definition must also acknowledge the role played by cognitive factors, because the way a person appraises a potential stressor affects the way they react. It is also important to acknowledge that stress can have positive as well as negative effects, since stress helps to keep us healthy and alert. Lazarus & Folkman (1984) defined stress as 'a pattern of negative physiological states and psychological responses occurring in situations where people perceive threats to their well-being which they may be unable to meet'. Hans Selye, who was a Canadian researcher, was conducting experiments sixty years ago hoping to discover a new s*x hormone. His experiments consisted of exposing mainly rats and some other animals to unpleasant or harmful stimuli such as injections, extreme cold and even vivisection. Selye discovered that all of the animals showed a very similar series of reactions to the stressors, including an expansion of the adrenal cortex, a reduction in the size of the thymus gland and ulcers in the stomach and small intestine, and concluded that the body's response to a stressor is non-specific. ...read more.

Just a year before Meichenbaum's research was published Kobasa et al came up with a similar approach to reducing stress known as 'Increasing Hardiness'. Kobasa believed that the concept of hardiness is the central understanding of why some people are more prone to stress than others. The research was on a group of managers, which they followed for three years. Kobasa obtained the Holmes-Rahe scale measurements from each of the managers and monitored their levels of stress and amount of illness they had. Kobasa found two different groups between the managers. One group who suffered from high amounts of stress but had very little illnesses but the other group who had high amounts of stress also had a high amount of illnesses. Kobasa found that the group who had high amounts of stress but only low amounts of illness also had high scores on the hardiness scales and this group were also less likely to suffer from stress-related illnesses compared to the other group which had low hardiness scores. Kobasa believed that hardiness consisted of three things, Control; this was the belief that the individual had control over the incidents occurring in their life rather than attributing control to outside influences. Commitment was also another component and this refers to a sense of involvement in the world around the individual and involving a strong sense of purpose in their activities. Challenge was the other component that refers to the individual's life changes, which are to be seen as challenges and opportunities rather than threats and stressors. From the research data Kobasa came up with three coping strategies to increase a person's hardiness. The first strategy was known as focusing, this is where the individual is trained to identify signs of stress and so recognise their sources. ...read more.

Because of these it seems obviously more beneficial to use more than one strategy at a time, For example, over 150 studies have shown exercise to be good for reducing depression and anxiety but even better if it is used alongside anti-depressant drugs such as Prozac and also using Psychotherapy (Arent et al 2000, Berger & Motl, 2000). The effectiveness of all psychological techniques is related to various factors. Co relational studies, where levels of fitness and exercise are recorded, along with frequency of stress related disorders, such as high blood pressure and depression, show consistent exercise is associated with low levels of depression and lower incidence of hypertension. Physical exercise is an obvious and effective way of removing excess glucose and fats: they are mobilized to provide for physical activity and blood levels fall as the muscles burn them up. It is predictable that regular exercise should have beneficial effects on stress related arousal. Social support is another mediating factor. Social support helps protect us against the damaging effects of stress. The value of social support also helps explain the upsurge in unofficial support groups in particular areas. There are various categories of social supports, e.g. emotional support such as comfort and reassurance, practical support from friends and family, or advice. The concept of control is central to stress and stress management. Gaining control is an important part of coping strategy in stress management. Pervious experiences could provide useful techniques for future coping if stressful, or previous failure could provide the individual with a negative attitude. Individual differences could also affect the effectiveness of psychological techniques as some people may protect themselves through denial or detachment. Stress management techniques increase the stress felt by these individuals. ...read more.