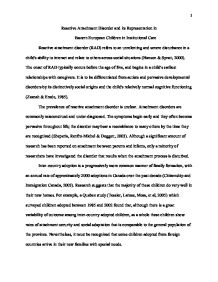 Reactive Attachment Disorder and its Representation in Eastern European Children in Institutional Care Reactive attachment disorder (RAD) refers to an unrelenting and severe disturbance in a child's ability to interact and relate to others across social situations (Hanson & Spratt, 2000). The onset of RAD typically occurs before the age of five, and begins in a child's earliest relationships with caregivers. It is to be differentiated from autism and pervasive developmental disorders by its distinctively social origins and the child's relatively normal cognitive functioning (Zeanah & Emde, 1985). The prevalence of reactive attachment disorder is unclear. Attachment disorders are commonly misconstrued and under-diagnosed. The symptoms begin early and they often become pervasive throughout life; the disorder may bear a resemblance to many others by the time they are recognized (Sheperis, Renfro-Michel & Doggett, 2003). Although a significant amount of research has been reported on attachment between parents and infants, only a minority of researchers have investigated the disorder that results when the attachment process is disturbed. Inter-country adoption is a progressively more common manner of family formation, with an annual rate of approximately 2000 adoptions in Canada over the past decade (Citizenship and Immigration Canada, 2003). Research suggests that the majority of these children do very well in their new homes. For example, a Quebec study (Tessier, Larose, Moss, et al, 2005) which surveyed children adopted between 1985 and 2002 found that, although there is a great variability of outcome among inter-country adopted children, as a whole these children show rates of attachment security and social adaptation that is comparable to the general population of the province. Nevertheless, it must be recognized that some children adopted from foreign countries arrive in their new families with special needs. Using recent research, this paper will provide an overview of reactive attachment disorder, its symptoms, characteristics and causal factors and a look into the susceptibility of institutionalized infants and children. ...read more.

They may develop an attachment orientation apparent by indiscriminate or diffuse attachments. They may endeavour to find comfort, support and nurturance in a peculiar manner with unfamiliar adults. Adoptive parents often perceive this orientation as very superficial. The length and severity of early deprivation appears to add to the increased risk (O'Conner, Rutter, et al, 2002). Children placed with an adoptive family early seem to experience fewer difficulties than children placed as a later age (O'Conner & Rutter, 2002). Statistical correlations from the British Columbia Romanian Orphan Study (Ames, 1997) showed that the amount of time spent in an orphanage was the most predictive factor for later difficulties. In a study from the United Kingdom, 165 children adopted from Romania, were compared with 52 children adopted within the UK (O'Conner & Rutter, 2002). There was a significant association between length of deprivation and severity of attachment disorder. Although many adopted children do not exhibit severe problem behaviour, many continue to exhibit indiscriminate sociability long after they become attached to their adoptive parents. The Quebec study (Tessier et al, 2005) found that the younger the child at the time of adoption, the more securely attached the child became to the adoptive parents. They also found that boys tended to be somewhat less securely attached than girls at the same age. Children who were under the age of six at the time of the study had similar levels of attachment as children of the same age who were born in Quebec. The B.C. Romanian Orphan Study found that the children who had resided in Romanian orphanages for long periods exhibited less secure patterns of attachment than the children who had been adopted from Romania shortly after birth, but that over time even the institutionalized children became more attached (not necessarily securely attached) to their adoptive parents. The children who continued to have attachment problems three or four years after adoption were those who also had other developmental problems (such as low IQ). ...read more.

with their incoherent understanding of attachment and intimacy. Wilson (2001) examines numerous studies that associate attachment problems in infancy with later psychiatric diagnoses. Wilson also refers to a study conducted by Rosenstein and Horowitz in 1996 that discovered that 97 percent of a group of 60 adolescents admitted to a psychiatric hospital reported feelings related to insecure attachment. Conclusion For institutionalized children awaiting adoption, tremendous caution should be used when administering care. Smyke et al. (2002) reported that when children in Eastern European orphanages had contact restricted to only a few caretakers, they were better able to establish a preference for a single caretaker. These children then profited emotionally from attaching to that favoured caregiver. When primary prevention has not occurred in the institution, treatment should begin as soon as symptoms are noticed and takes the form of early intervention. Parents should receive candid instruction in care-taking responsibilities as well as education in understanding their child's needs. Reactive attachment disorder is a bewildering, taxing problem facing children and families. Lack of sufficient research on reactive attachment disorder is an obstacle to forming the well-defined characterization of the disorder that is needed for consistency and validity in its diagnosis. What has long been established is that when caring and patient adults encourage traumatized children to express their emotions, they will gradually open up to new emotional experiences (Eagle, 1994, cited in Hayes, 1997). With successful intervention, there is a considerable likelihood that these children will learn to resolve persistent emotional numbness and defensiveness. At this time, attention may be best served in educating adoptive parents in the recognition of symptoms of RAD as well as in effective nurturing and attentive parenting methods. Further research into assessment and diagnostic tools is needed to allow for earlier recognition of RAD in clinical and counselling settings. Studies need also be conducted in assessing current and possible therapies for children suffering from reactive attachment disorder to determine which possibilities offer the best outcomes in the development of positive attachments between child and caregiver. ...read more.