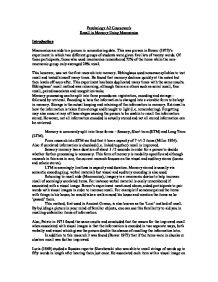 Psychology A2 Coursework Recall in Memory Using Mnemonics Introduction Mnemonics are aids to a person in remembering data. This was proven in Bower (1973)'s experiment in which two different groups of students were given five lists of twenty words. Of these participants, those who used mnemonics remembered 72% of the items while the non-mnemonic group only averaged 28% recall. This however, was not the first research into memory. Ebbinghaus used nonsense syllables to test recall and tested himself many times. He found that memory declines quickly at the outset but then levels off soon after. This experiment has been duplicated many times with the same results. Ebbinghaus' recall method was relearning; although there are others such as serial recall, free recall, paired associates and recognition tasks. Memory processing can be split into three procedures: registration, encoding and storage - followed by retrieval. Encoding is how the information is changed into a storable form to be kept in memory. Storage is the actual keeping and retaining of the information in memory. Retrieval is how the information is taken from storage and brought to light (i.e. remembering). Forgetting may also occur at any of these stages causing the person to be unable to recall the information stored. However, not all information encoded is actually stored and not all stored information can be retrieved. Memory is commonly split into three forms - Sensory, Short term (STM) and Long Term (LTM). ...read more.

Apparatus A list of instructions on how the experiment will work. A word list consisting of ten words to memorize (words were chosen at random and were unconnected). Stopwatch with which to time the one minute participants had to remember the words. All of these were standardised - i.e. every participant had exactly the same in every case. The score of each participant was taken down on a sheet hidden from view. Procedure Participants were first informed of their right to withdraw from the experiment and that their personal information would not be used at all during or following the experiment. Also, they were informed that they could view their results at any time. Participants gave informed consent and were again told that they had the right to withdraw at any time. Participants were then told about the experiment and what to do, (these instructions differed between the two groups, but within the groups, the information was standardised). There were two experimenters present at each experiment to ensure that each one was using the standardised procedures and to decrease experimenter bias. Participants in the Experimental group were instructed how to use the Mnemonic device both via a written list of instructions and verbally. Control group members were not taught this method and were instructed to begin memorizing the word list immediately after being introduced to the experiment. The experiment begins after the participant completely understands what to do. Participants were required to memorise a list of ten words in no particular order, within the space of a minute. ...read more.

One could have selected a target population that included people without any educational background (and so would be unused to learning rules) and one could choose participants from different age groups. Also, the sampling method used was not random so there would definitely an element of bias in the sample chosen. A computer could have selected participants randomly but this would not be necessary in a study of such a small scale. As in Bower's study, the word lists could have been longer (20 words or more) and there could have been more of them (Bower used 5 lists). In this study, with only 10 words in the list, participants would be able to memorise the words without using the mnemonic device. Longer word lists would have made it more difficult for the participants to use repetition to recall the items. In addition, the interference task may not have been effective enough as recency effect was still present, as mentioned above. This experiment could be used both in everyday life (e.g. remembering shopping lists) and in medical cases (e.g. Amnesiacs or sufferers of brain trauma) to aid memory and in the case of Amnesia, to slowly reconstruct the client's memory. Further to this study, one could research the gender differences in depth regarding mnemonic aids in memory. Also, one could study the effects of mnemonics across different cultures. This would help as different things can be thought of in different ways by different cultures e.g. the items on the word list or the places in the Loci method may mean something to one culture but mean nothing to another culture. ...read more.