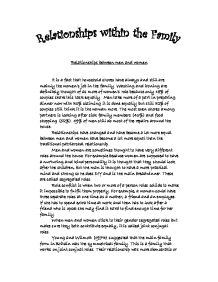 Relationships between men and women.

Relationships between men and women It is a fact that household chores have always and still are mainly the women's job in the family. Washing and ironing are definitely thought of as more of women's role because only 18% of couples share this task equally. Men take more of a part in preparing dinner now with 35% claiming it is done equally but still 32% of couples still think it is the woman more. The most even chores among partners is looking after sick family members (45%) and food shopping (52%). 49% of men still do most of the repairs around the house. Relationships have changed and have become a lot more equal between men and women have become a lot more equal than the traditional patriarchal relationship. Men and women are sometimes thought to have very different roles around the house. For example because women are supposed to have a nurturing and kind personality it is thought that they should look after the children, but the man is thought to have a more practical mind and strong so he does DIY and is the main breadwinner. These are called segregated roles. Role conflict is when two or more of a person roles collide to make it impossible to fulfil them properly. For example, a woman could have three separate roles at one time as a mother, a friend and an employee. ...read more.

Sometimes sociologists say that social class and ethnicity change role relationships. It is suggested that working class families are more male dominated (patriarchal). Evidence proves that middle class conjugal relationships are more equal than working class ones but it is also said that working class fathers are more involved in childcare. It is believed that Asian families are usually based on unfair patriarchal relationships. Westwood and Bhachu (1988) challenge this idea arguing that images of the Asian family are usually based on prejudice and prejudgement. They point out that Asian families are in fact British families and are a strong source of resistance against the racism of British society. In reality there are ethnic differences between Asian people in Britain according to religion and social class, which makes it hard to generalise about the Asian family. Henriques and Slaugher talk about the patriarchal relationships between men and women. This means that the relationship is male dominated. They talk about the two different segregated roles. Children and parents Relationships between children and parents have changed over time but it has always varied between working, middle and upper class families. Throughout the nineteenth century life chances varied a lot for different classes for children. A paid employee such as a nanny would often look after higher-class children. This would often separate their children from their parents and so it would be harder for them to develop a strong bond. ...read more.

More women are furthering their education. Women can choose to wait until a convenient time until they have left education and built a successful career for themselves or travelled. Another fact is the cost of children, they may wish to wait to be able to afford the expenses of having a child or until they can afford a house to live in. People are tending to want a higher standard of living instead of spending a lot of time and money rearing children. There is a growing decline in religion, which means that there isn't such disapproval on birth control. The media also show smaller families or couples having children later because of women having careers which makes it more socially acceptable. Probably the most important reason is the changing attitudes to women. Over this century women have changed their views on their role. Traditionally women would have children and then stay at home as a housewife and look after them. Women see this as just part of their lives, but they also want careers. The result is fewer children and later on in life. All of the reasons listed mean that it is now normal to have only two children in a family. Cultural expectations mean that large families can be seen as slightly abnormal. The result of lower fertility is that we have an ageing population with a lot of old and middle age people but fewer young people. This means there will be a smaller population. There will be less people to fill jobs and carry on society. ...read more.