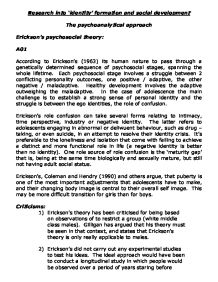 Research into 'identity' formation and social development The psychoanalytical approach Erickson's psychosocial theory: A01 According to Erickson's (1963) its human nature to pass through a genetically determined sequence of psychosocial stages, spanning the whole lifetime. Each psychosocial stage involves a struggle between 2 conflicting personality outcomes, one positive / adaptive, the other negative / maladaptive. Healthy development involves the adaptive outweighing the maladaptive. In the case of adolescence the main challenge is to establish a strong sense of personal identity and the struggle is between the ego identities, the role of confusion. Erickson's role confusion can take several forms relating to intimacy, time perspective, industry or negative identity. The latter refers to adolescents engaging in abnormal or deliwuent behaviour, such as drug - taking, or even suicide, in an attempt to resolve their identity crisis. It's preferable to the loneliness and isolation that come with failing to achieve a distinct and more functional role in life (a negative identity is better than no identity). ...read more.

Research for: Marcia's findings suggest that it is important to distinguish which of the 4 aspects of identity development is experienced as those in the moratorium felt much more positive than those in the diffusion and foreclosure statuses, and this supports the validity of the statuses. Research against: Offer (1969) reported on an extensive study of American adolescents and found that only a very small minority showed any signs of identity crisis. Similarly, siddique and D'Arehy (1984) reported that less than 25 % of their sample showed psychological distress. The majority appeared to experience a smooth transition through adolescence to adulthood. It was also clear that, when applied to females, even Marcia (1980) accepted that his statuses work only more or less. The view that the male experience is the standard a criticism applied by Gilligan (1982) to Erickson's and Marcia. Critisisms: + 1) realism: Marcia's approach to identity is more flexible than Erickson's, who tends to see it as all or nothing, i.e. identity achievement verses diffusion. ...read more.

Research for: Research on good parental relationships (e.g. Ryan and Lynch 1989) supports Coleman's claim that adolescence need not be time of stress. Research against: Freud's approach can be contrasted with the social approach, as he believes adolescent crisis is more a consequence of early childhood conflicts than current external pressures. Criticisms: + 1) high population validity: the sample size was large in Coleman and Hendry's and in Rutter's research, which increases confidence in the generalisabilty of the findings. + 2) face validity: many individuals clearly do cope with adolescence without serious disturbance and so it does make sense that adolescence is a time of change but not necessarily of crisis. Certainly Coleman's emphasis on the external pressures at adolescence is integral to our understanding of adolescence. - 3) Self respect: participant and researcher effects may have biased the research. - 4) Understanding of 'crisis': the term may not have been used to mean the same thing. Erickson's and Marcia's understanding of it as a normal and healthy event suggest that they view it differently to Coleman, who seems to see it more as psychological breakdown. ...read more.