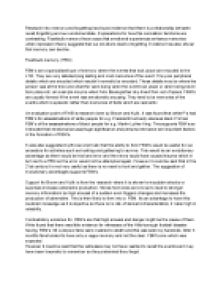 Research into memory and forgetting has found evidence that there is a relationship between recall,forgetting and our emotional state.

?Research into memory and forgetting has found evidence that there is a relationship between recall,forgetting and our emotional state. Explanations for how this correlation functions are contrasting. Flashbulb memory theory says that emotional experiences enhance memories while repression theory suggests that our emotions lead to forgetting. Evidence has also shown that memory can decline. Flashbulb memory ( FBM) FBM&#39;s are a specialised type of memory where the events that took place are encoded to the LTM. They are very detailed,long lasting and vivid memories of the event. They are peripheral details which are encoded which wouldn?t normally be encoded. These details may be where the person was at the time and what the were doing when the event took place or when being told it took place etc. an example may be when Felix Baumgartner sky dived from out of space. FBM&#39;s are usually formed if the event was emotionally arousing. They tend to be memories of the events which is episodic rather than memories of facts which are semantic. An evaluation point of FMB is research done by Brown and Kulik, it was found that white P&#39;s had FBM&#39;s for assassinations of white people for e.g. ...read more.

Freud says that the Oedipus and Elektra complex go through repression whereby the child represses incestuous desires towards the the opposite sex parent and feelings of rivalry towards the same sex parent. Freud didn’t believe all forgetting can be explained through repression but most of it could be due to getting rid of unwanted and unnecessary information. People may forget experiences because of unpleasant associations for e.g. you may forget your homework because you didn’t want to do it so you simply pushed it out of your mind. This is called suppression which is a conscious or semi conscious behaviour as distinct from repression that occurs unconsciously. Repression is when the ego protects itself from emotional conflicts. Traumatic events cause anxiety and to reduce this the memory of the even is forgotten, this anxiety maybe expressed through dreams or disordered behaviour as in the the case of little Hams. The repressed memories continue to affect conscious thought,desire and action even though there is no conscious memory of the traumatic event. Once the traumatic event is repressed  from the conscious mind to the unconscious mind it make individual feel better,at least temporarily. ...read more.

P&#39;s who learned the list in a sad mood recalled them better in that mood. The finding obtained in this study supports the mood congruent memory. However this study lacks ecological validity as well as mundane realism. It could also be said that the level of depression in the patient would affect the findings of the study. Clinical depression  patients who often have memory problems can be related to this study. They had trouble remembering memories about themselves and recall more negative memories than positive ones.. this may be because they may have gone through more negative memories than positive so they feel the need to dwell of the negative thoughts. Cognitive therapy attempts to get P&#39;s to have more balanced view rather than a negative one and helps them see the positives as well as the negatives. Part of cognitive therapy attempts to get P&#39;s to recall less depressing memories and more positive memories. Although research on repression  and depression suggests that emotion leads to memory loss the evidence of FBM&#39;s suggests the opposite. Within all the three explanations there is both supporting and refuting evidence so it might be best to take an eclectic view of how emotion and memory are connected. ...read more.