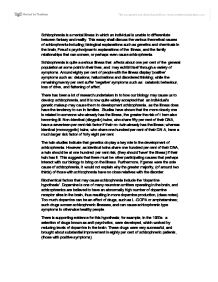 Schizophrenia. This essay shall discuss the various theoretical causes of schizophrenia including; biological explanations such as genetics and chemicals in the brain, Freud`s psychodynamic explanations of the illness, and the family relationships that ca

Schizophrenia is a mental illness in which an individual is unable to differentiate between fantasy and reality. This essay shall discuss the various theoretical causes of schizophrenia including; biological explanations such as genetics and chemicals in the brain, Freud`s psychodynamic explanations of the illness, and the family relationships that can worsen, or perhaps even cause schizophrenia. Schizophrenia is quite a serious illness that affects about one per cent of the general population at some point in their lives, and may exhibit itself through a variety of symptoms. Around eighty per cent of people with the illness display 'positive' symptoms such as: delusions, hallucinations and disordered thinking; while the remaining twenty per cent suffer 'negative' symptoms such as: catatonic behaviour, loss of drive, and flattening of affect. There has been a lot of research undertaken in to how our biology may cause us to develop schizophrenia, and it is now quite widely accepted that an individual's genetic makeup may cause them to development schizophrenia, as the illness does have the tendency to run in families. Studies have shown that the more closely one is related to someone who already has the illness, the greater the risk of them also becoming ill. Non-identical (dizygotic) twins, who share fifty per cent of their DNA, have a seventeen per cent risk factor if their co-twin already has the illness; whereas identical (monozygotic) ...read more.

In addition there is the question of cause and effect; these types of abnormalities may be a symptom of schizophrenia rather than a cause. Furthermore such abnormalities may exist in many healthy individuals; however we would not know this for sure as perfectly healthy people tend not to have brain scans as there is no need to. Certain viral infections, (that may occur before birth), are also believed to play a role in the development of schizophrenia. There is some evidence to back up this theory; Torrey (2000) found that a high percentage of schizophrenics are born during winter, when exposure to viruses is high. Mothers of schizophrenics are more likely to have been exposed to illnesses (such as the flu virus) during pregnancy, than the mothers of those without the disorder. It is believed that the effects of the virus on the child may remain dormant until activated by hormonal changes at puberty which bring about schizophrenia, (Gherardelli, 1992, cited in class notes). This would help to explain why some children display unusual behaviour, (such as withdrawal), before they reach their teens or early twenties, when they develop symptoms of schizophrenia. A further strength of this theory is that it explains why schizophrenia can, and often does, appear in individuals who do not have relatives with the disorder, and therefore no genetic pre-disposition to developing it. ...read more.

Patients may also see certain behaviours by other patients receiving attention; and so learn to behave more in such a way themselves as a result. Unfortunately this theory does not account for how schizophrenic behaviours start, but only how they may be reinforced once they are already there. It also fails to explain why some patients genuinely experience symptoms such as hallucinations, and withdrawal, (in which case a patient would not want to receive attention). For such reasons it is generally accepted that the behavioural model contributes little to the understanding of the causes of schizophrenia, (Freud, 1998, cited in class notes). In conclusion, it is the biological explanations of the causes of schizophrenia that seem to receive most support; however the fact that the concordance rate in twin studies does not match up completely shows that other factors must be involved. This idea is backed up by the diathesis stress model, which shows the importance of stressful life events in contributing to the illness. Furthermore the fact that patients living in households high in expressed emotion suffer more relapses shows that stress does appear to be a significant factor also. Psychodynamic and behavioural explanations of the illness have received little support and are largely lacking in empirical evidence; therefore they have contributed little to our knowledge of schizophrenia. ...read more.