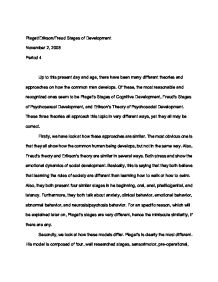 Piaget/Erikson/Freud Stages of Development November 2, 2008 Period 4 Up to this present day and age, there have been many different theories and approaches on how the common man develops. Of these, the most reasonable and recognized ones seem to be Piaget's Stages of Cognitive Development, Freud's Stages of Psychosexual Development, and Erikson's Theory of Psychosocial Development. These three theories all approach this topic in very different ways, yet they all may be correct. Firstly, we have look at how these approaches are similar. ...read more.

Furthermore, they both talk about anxiety, clinical behavior, emotional behavior, abnormal behavior, and neurosis/psychosis behavior. For an specific reason, which will be explained later on, Piaget's stages are very different, hence the miniscule similarity, if there are any. Secondly, we look at how these models differ. Piaget's is clearly the most different. His model is composed of four, well researched stages, sensorimotor, pre-operational, concrete operations, and finally, formal operations. What these stages talk about are how the human being develops cognitively or how their thinking develops. ...read more.

Freud's and Piaget's say that they grow into them, meaning they don't really have control on how fast they progress, but they do have control on whether they do want to progress. As we can see, these approaches all are capable of being perfectly right, even though they approach the topic in a different way. It's like saying someone took one road to get somewhere, and another took a different route and both got at the same destination at the same time. There wasn't a "wrong" road, they were both valid. Just as in this example, the three models are all capable of being valid. ...read more.

The candidate has attempted to answer the question well, if a little complexly because of the frequent comparisons thrown about; the structure may seem simple but there are frequent moment where some of the answer is hard to follow. This ...

The candidate has attempted to answer the question well, if a little complexly because of the frequent comparisons thrown about; the structure may seem simple but there are frequent moment where some of the answer is hard to follow. This does not detract from the psychological knowledge of the candidate as everything they say is highly valid, it just appears that cohesive essay writing may be an issue. Nonetheless, the candidate has tackled the question well and provides a number of comparison points between the three theories, all of which a completely valid comparisons.

The Level of Analysis is not marked here; instead it is AO1 (knowledge and understanding) that is primarily marked. The knowledge of the theories appears to be a sound and this really assists in creating an essay that can compare a number of different similarities and differences between Freud's, Piaget's and Erikson's developmental theories. There are some discrepancies in the knowledge though, such as suggesting Freud's psychosexual stages differ from Piaget's cognitive stages because the latter is primarily concerned with physical development - this isn't true as the Oedipus complex and the development of the Ego is most definitely psychological, and so you could instead argue that Erikson's theory is the primarily physical one; that Piaget's is the primarily psychological one, and that Freud's considers both psychological and physical development.

Other than that, this candidate retain unbroken focus on the question and rounds their answer off nicely with an appropriate conclusion.

The Quality of Written Communication here is average. There are no instance were the essay loses sense due to incorrect spelling/application of a psychological term however, the sentence syntax of a few paragraph is skewed and become difficult to read. This entire section: "This is different, as opposed to Freud's and Erikson's, which are mainly physically. On the other hand, Erikson's though similar to Freud's, has some differences. His theory doesn't stop at latency, unlike Freud's, or Piaget's, which doesn't even include any same stages" is filled with unnecessary commas and additional information that can simply be removed and clear up the complexity of the sentences structures. I would advise to re-read this and the re-visit how best to convey the differences and similarities discussed, in this small excerpt particularly.